Thirty top-tier curling teams are gathered in Cranbrook, B.C., this week for the Grand Slam of Curling Tour Challenge. At the Western Financial Place Arena, you’ll find thirty of the top names: Homan and Jones, Koe and Epping, and all the other teams near the top of the rankings. 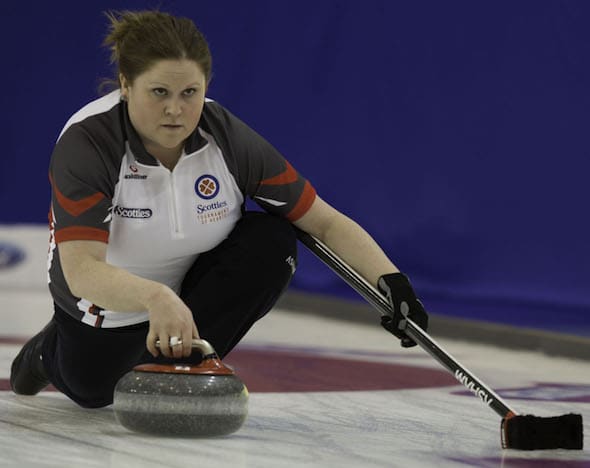 Kerry Galusha is savouring the chance this week to play on arena ice at the Grand Slam Tour Challenge in Cranbrook, B.C.

A minute up the road is the Memorial Arena, where 30 (15 of each gender) more teams are in action. The Tour Challenge features a second tier, which invites the next 10 ranked teams and five regional teams (based on event location) to participate, offering them a chance to play in a Slam environment, including the opportunity to play on arena ice.

“We don’t play on arena ice until the Scotties (Tournament of Hearts),” said Kerry Galusha, one of the regional invitees, and 13-time Scotties skip out of the Northwest Territories. “Everyone knows how different it is. It takes a bit to adjust, especially for us . . . so four games on arena ice is huge.”

While the top tier is competing for a share of $125,000 (in both men’s and women’s events), the second tier’s purse is $50,000; still bigger than most World Curling Tour events. Aside from the money and valuable points on world and Canadian rankings, the winner is also invited to the Meridian Canadian Open, a Grand Slam scheduled for January 2017 in North Battleford, Sask., and also the Humpty’s Champions Cup, which will be the last GSOC event of the year.

“There are so many good teams in Tier 2. This is as tough as any other event,” said Galusha. “You have to play well every game. But even just being here is a great experience for us. It’s been amazing.”

Galusha’s Yellowknife foursome is currently 1-2, and looking to squeak into a playoff spot, perhaps through a tiebreaker.

“It’s a do-or-die game tomorrow,” she said. “Our goal was to be 2-2, and hopefully get into a playoff position, and then we can build from there.”

Surprisingly, the Tier 2 event features Glenn Howard (Penetanguishene, Ont.), who had dropped out of the top 15 places on the WCT Order of Merit when the field was decided. Not surprisingly, however, the four-time world champion has started his week with two decisive wins. Also in the field is 2006 Tim Hortons Brier champion, Jean Michel Ménard (Gatineau, Que.). 2014 Ontario champ Greg Balsdon, two-time U.S.A. champ Craig Brown, and Scottish champ Tom Brewster have all started 2-0 as well.

On the women’s side, 2016 Scotties silver-medallist Krista McCarville of Thunder Bay, Ont., Winnipeg’s Joelle Brown, and Nina Roth of the U.S. have also started the weekend with two wins.

The teams who advance to the final will have to adjust to new rocks and a different sheet of ice, as they’ll play in the bigger arena up the street. The Tier 1 competition has been using a new set of stones that have been a little less predictable than the previous GSOC set. It can take several games, even weeks or months, before a new set of rocks settles into consistent play.