It’ll be a Northern Ontario-Manitoba clash for gold today at the 2017 Canadian Mixed Curling Championship in Yarmouth, N.S. 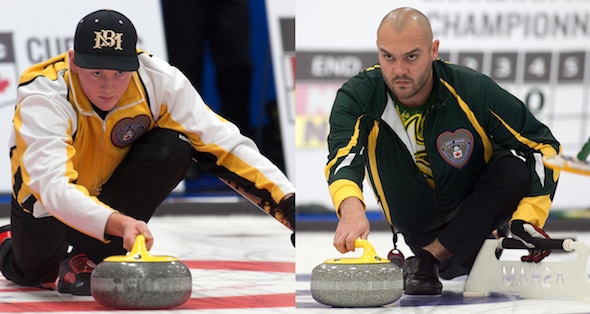 The No. 3 and 4 seeds following round-robin play at the Mariners Centre each pulled off semifinal victories on Saturday to reach the championship final, which is set for 2:30 p.m. AST.

The winner will earn the right to represent Canada at the 2017 World Mixed Curling Championship next fall in Champéry, Switzerland.

Ontario, 10-0 coming into the semi, had opened the scoring with a third-end deuce, but Manitoba, 7-3 in round-robin play, responded with a deuce of its own in the fourth end, and then engineered clutch single-point steals in the sixth and seventh ends for the victory.

Northern Ontario’s Trevor Bonot, meanwhile, took control early and never looked back in a 5-4 win over Saskatchewan’s Brady Scharback in a battle of 8-2 teams. Bonot’s team from the Port Arthur Curling Club in Thunder Bay (third Jackie McCormick, second Kory Carr, lead Megan Carr) gave up a single in the first end, but bounced back with a deuce in the second and a stolen deuce in the third en route to the victory.

Ontario and Saskatchewan will play for the bronze medal, also at 2:30 p.m. AST.

Manitoba will be playing for its ninth Canadian mixed championship, and its first since Sean Grassie prevailed in 2009 at Iqaluit, Nunavut.

Northern Ontario, meanwhile, has three previous victories, and none since Chris Johnson took gold in 1997 at Kindersley, Sask.