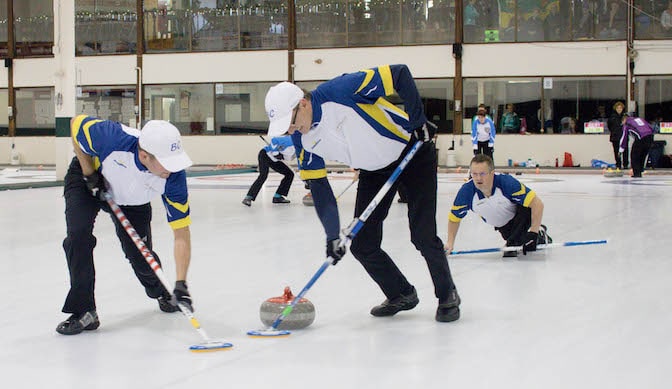 Schmidt knocked off Yukon’s Pat Paslawski in men’s tiebreaker action on Friday morning in front of a home-province crowd at the Kelowna Curling Club. “Kelowna has been awesome for us. It’s been an advantage to be in the same time zone, not a huge trip here and just to have people we’ve met over the years in B.C. curling come out and cheer us on is pretty special,” Schmidt said right after his 6-5 win. Schmidt with third Norm Coté, second Craig Bernes and lead Darren Richards broke the game open with three points in the fifth end. Paslawski needed a piece of the four foot in the eighth end to force the extra end but slipped a bit long. “That was such a big win for us. We really wanted to keep playing in this tournament and we couldn’t be happier with the win,” the B.C. Skip added. British Columbia and Yukon both finished Pool B round robin with 3-3 records. Schmidt and his team will now face Manitoba’s Andrew Wickman (5-1) in the quarter-finals. Ontario awaits the winner of that match. Alberta, skipped by Scott Webb, cruised to a 10-2 victory in the Pool A tiebreaker game over Prince Edward Island’s Dennis Watts. The team from Peace River, Alta., will play Nova Scotia in the other men’s quarter-final Friday at 2 p.m. (all times Pacific) with the winner of that game facing Saskatchewan (6-0) in the evening. 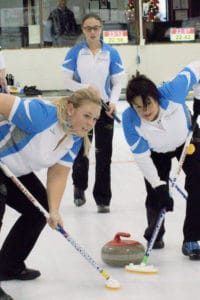 Since the first Travelers Curling Club Championship in 2009 in Toronto, Alberta has won the men’s title three times, while Saskatchewan has claimed two titles and Ontario and Newfoundland and Labrador have one apiece. Quebec emerged victorious in the lone women’s tiebreaker game on Friday. Nathalie Gagnon’s team will take on Nova Scotia’s Denise Fitzgerald (5-1) in the Friday afternoon quarter-final. The winner will play Manitoba (4-2) in the semifinal. Newfoundland and Labrador (4-2) faces Ontario (5-1) in the other women’s quarter-final. Alberta’s women’s champions (5-1) will play the winner of matchu. The semifinal winners will play for gold, and the losers will play for bronze, Saturday at 10 a.m. The week-long competition offers an elite national championship experience to Canada’s best club curling teams. All 14 of Curling Canada’s Member Associations (10 provinces, three territories and Northern Ontario) are represented in both genders. Selected games from the 2016 Travelers Curling Club Championships will be live-streamed at www.curling.ca/2016travelers/ Scores and standings from the event will be available at www.curling.ca/scoreboard/. For draw times, team lineups and other event info, go to: www.curling.ca/2016travelers/