This week, John sits down with Taylor McDonald, who at just 23 already has a pretty sterling résumé, having won a pair of World Junior and CIS-Curling Canada Championships. Taylor is also featured in the latest Women of Curling Calendar raising money for the Mental Health Foundation and will be playing in the 2016 Canada Cup in Brandon, Man., next week. Welcome to Magical Question Fun Time, the Curling Canada feature where comedian John Cullen sits down with your favourite curlers for interviews like you have never seen. Each interview will feature eight questions: five standard questions that will be asked to each curler, two questions specific to that curler, and one question that the curler interviewed before them asks. 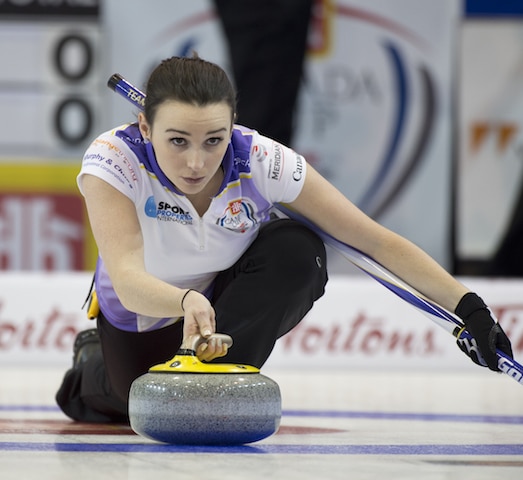 1. What’s the nicest shot you’ve ever been a part of? Taylor McDonald: Oh jeez, I am really terrible at remembering shots. I saw that Dana (Ferguson) said she was too, and I am seriously so bad too. John Cullen: Maybe it’s a seconds thing. TM: [laughs] Maybe. I do remember last year, we were playing at The National and we were losing to Rachel Homan and in the fourth end, Kelsey made this ridiculous, thin triple that nobody thought was there. And so we only gave up two instead of 5! [laughs] JC: [laughs] I’m glad that’s the nicest shot ever, that you held the team to two. Huge accomplishment. [laughs] Did you win the game? TM: God no. [laughs] Not even close, I think we lost like 7-1 or something. But it was a pretty great shot, one of those ones no one really talks about, but I remember calling Kelsey a hero, the commentators all loved it…it was still pretty cool. 2. Who could you take in a fight? TM: I think I can take anyone on my team, to be honest. I have a solid foot on basically everyone on my team, and a way bigger wingspan. So I just plan to use my reach and it’ll be no problem. JC: Have you trained to hit people at distance. Is this something you know how to do? TM: Well, I did take taekwondo when I was younger for like three years, and I made it a few levels, got a few belts. JC: Do you still have the belts? TM: Unfortunately not, no. [laughs] JC: Because that would be badass, just tighten up the belt and go at it with one of your teammates. Now, you’ve said you could take all four of them, which one do you think you’re most likely to get in a fight with? TM: I think Jen. We got the front end thing. We give each other a hard time a lot, and so I think we would be the ones most likely to go at it. But for the record, I would win. She’s too nice and friendly. I would get a few hits in before she even knew what was going on. [laughs] 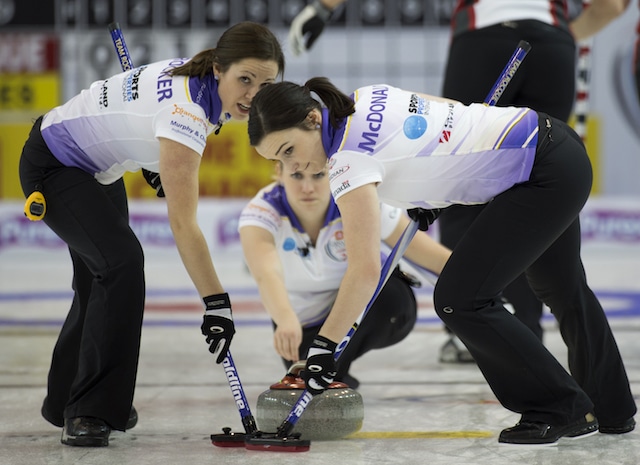 Taylor McDonald (right) sweeps teammate Jen Gates’s rock: “She’s too nice and friendly. I would get a few hits in before she even knew what was going on.” (Curling Canada/Michael Burns photo)

3. If a deli named a sandwich after you, what would be on it? TM: This question is another one that’s really hard for me to answer, because I take food very seriously. I’ve honestly been reading your interviews to prepare and I’ve thought of this for the last 24 hours. [laughs] JC: That’s longer than anyone has ever thought about my questions. Or should have. [laughs] TM: [laughs] Fair enough, I just wanted to get it right, and I think my answer is just that I’m gonna go with a loaded sandwich. Basically, whatever is in the fridge that day, pile it on. Except celery. Celery sucks. It’s a waste of time. 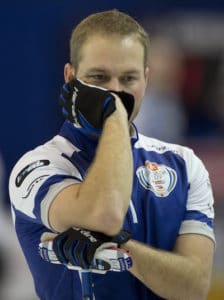 JC: What about the type of bread? TM: Honestly, I don’t care. That’s the least concern of mine. I care way more about the condiments, gotta pile those on there. I would go with mayo, mustard, and then a lot of people may not know this, but a weakness of mine is Cheez Whiz. JC: So wait, you’re saying food is super important to you and yet you love Cheez Whiz? TM: I know it’s not really a food, but I love it. [laughs] I’d throw a few meats on there, lots of veggies, I love veggies—and to counterbalance the Cheez Whiz—and that would be that. JC: So you’re seriously throwing Cheez Whiz on there? How often do you eat it? I don’t think I know anyone who eats it regularly. TM: I eat it…pretty often. [laughs] The only other person I know who eats it regularly is Geoff Walker, Brad Gushue’s lead. Laura (Crocker, Taylor’s teammate and Geoff’s partner) won’t let him, so the two of us have bonded over that. She’s pretty healthy, so we try to sneak it when we can. [laughs] 4. What’s the worst job you’ve ever had? TM: I’ve been in the same job for a long time, but the worst I think is, sorry Dad [laughs], I worked for my dad at his car dealerships. I was too young to really have a proper job, so he gave me a job sweeping parking lots, pulling weeds, and doing other chores in the summer heat that I didn’t want to do. [laughs] JC: Was your dad ever around giving you the business and really bossing you up? TM: I think he was around a little bit for sure, but he generally delegated the supervision of me to others. [laughs] I remember having this huge weed sprayer backpack thing that I carried around— JC: That’s pretty hot! TM: [laughs] Oh yeah, absolutely. Super hot accessory. I looked like a Ghostbuster and wanted to quit pretty much from the time I was 16. I just had to wait it out until I cared enough to find another job, that’s the only way I could leave. So I did it until I was 18. [laughs] Sorry, Dad! 5. What’s a stupid thing you incorrectly believed was true for a long time? TM: There’s a few. [laughs] I’m really bad for this, I’m terrible at fact-checking. I think the worst one is probably that when I was a kid, I believed that no matter where we were driving or how many I saw, if we were driving at night, those red lights on top of cell phone towers were Rudolph. All of them. [laughs] JC: [laughs] So how did that start? Because I think I can remember having the same thing, but I probably stopped believing it when I was six. TM: Oh, I believed it way longer than that. [laughs] I think my parents were the ones who maybe started telling me that, and then I just went with it and didn’t see any reason to think otherwise. I honestly don’t even think I grew out of it, I think it just happened that one day I saw the towers at dusk so there was enough light to see Rudolph wasn’t there, and that’s when I stopped. [laughs] 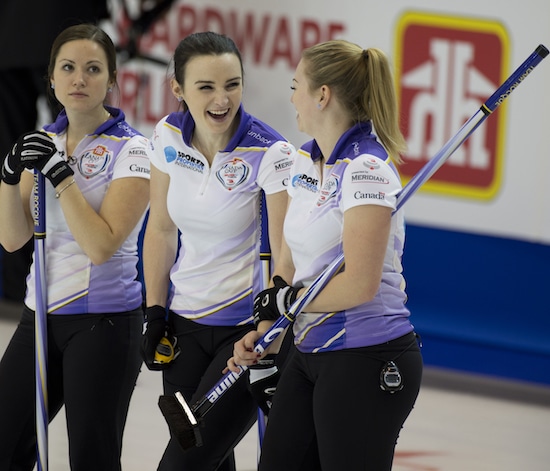 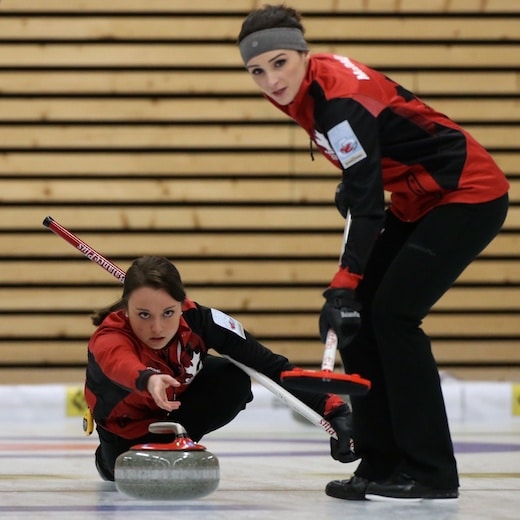 Taylor McDonald and skip Kelsey Rocque in action at the 2014 World Junior Curling Championships, where they won the gold medal (WCF photo)