Before Tuesday night, Brad Gushue hadn’t thrown a rock in a competitive setting since April. Somehow, despite playing three months of the season without their veteran skip, Team Brad Gushue still sits atop the Canadian Team Ranking System men’s standings, thanks to superior efforts from Mark Nichols, Brett Gallant and Geoff Walker. 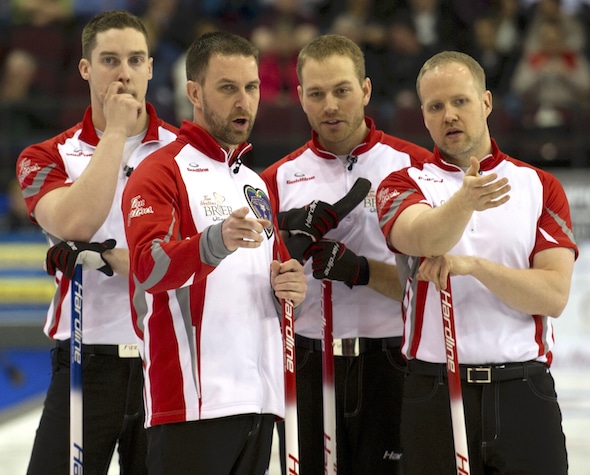 This week at the Boost National Grand Slam of Curling event in Sault Ste. Marie, Ont., the St. John’s foursome is playing in its typical lineup for the first time this season.

“It’s great to have Brad back,” said Nichols. “We’re really happy to have the whole lineup back together, and I’m really happy I don’t have to skip anymore!”

With Gushue back at the helm after a long battle with a nagging hip/groin injury, the Newfoundlanders didn’t miss a beat, taking down the hometown favourite Tanner Horgan, and Saskatoon’s Steve Laycock in their first two games.

“It’s going well so far, and we’re looking forward to the next few slams, and obviously our provincial playdowns,” said Nichols.

Gushue isn’t the only squad off to a good start. Just a few days after winning the Home Hardware Canada Cup, presented by Meridian Manufacturing, men’s title in Brandon, Man., Winnipeg’s Reid Carruthers is also 2-0 in the Soo, with wins over John Shuster of the U.S. and fellow Winnipegger Mike McEwen. Carruthers’ Home Hardware Canada Cup win moved his team into second on the Canadian Team Ranking System, and also earned the team a berth straight to the Tim Hortons Roar of the Rings Canadian Curling Trials.

Toronto’s John Epping is currently third on this season’s CTRS, and is also undefeated through two games.  Hometown hero, Brad Jacobs has been thrilling his local crowd so far, beating Horgan, and Edmonton’s Brendan Bottcher.

On the women’s side, Ottawa’s Rachel Homan looks to erase the memory of last week’s loss in the Home Hardware Canada Cup final, and is off to a good start in Sault Ste. Marie. wins over Calgary’s Chelsea Carey and Thunder Bay, Ont.’s Krista McCarville put her at the top of her pool, with games against Caledon, Ont.’s Alli Flaxey (already a Grand Slam winner this season), and Sudbury, Ont.’s Tracy Fleury still to come.

Edmonton’s Val Sweeting just missed out on playoffs in Brandon, and is trying to make sure that doesn’t happen again this week. She, too, is 2-0 after beating reigning world champion Binia Feltscher (Switzerland) and South Korea’s EunJung Kim. She’ll still have to face Winnipeg’s Jennifer Jones (last week’s Home Hardware Canada Cup winner, and current CTRS leader) who is 1-1.

Switzerland’s Silvana Tirinzoni and Russia’s Anna Sidorova are tied at the top of the third pool, although they each have suffered a loss.

Games will air on Rogers Sportsnet channels all week, with some weekend playoff action airing on CBC.