The final two pieces of the puzzle have been filled in for the 2017 World Financial Group Continental Cup, presented by Boyd Gaming. 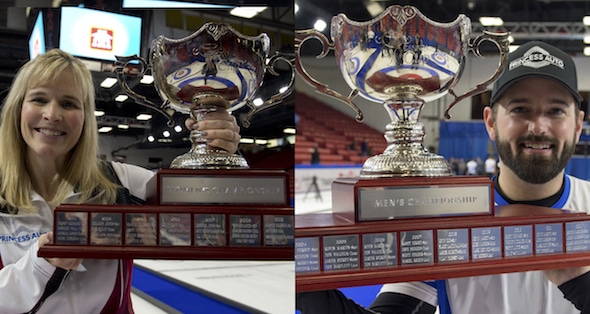 Curling’s version of the Ryder Cup, which is scheduled for Jan. 12-15 at the Orleans Arena in Las Vegas, welcomed the final two entries this past weekend with the victories by Winnipeg’s Reid Carruthers and Jennifer Jones at the 2016 Home Hardware Canada Cup, presented by Meridian Manufacturing.

They’re now added to Team North America, which will be looking to extend its four-year win streak when they battle Team World in the unique four-day competition that features three unique styles of curling competition (traditional team, skins, mixed doubles). Each segment awards points for wins (or ties). A total of 60 points are available, meaning the side that earns more than 30 points will be declared the champion.

“Jennifer has so much experience at the WFG Continental Cup, so it will be great to have that team’s veteran presence on board,” said Team North America coach Rick Lang. “At the same time, three members of Team Carruthers will be making their debut, so I know they’ll add a lot of excitement and energy to the team. We’ll need all of that because we’re expecting Team World to leave nothing on the table in Las Vegas.”

Team Jones (the team is rounded out by vice-skip Kaitlyn Lawes, second Jill Officer and lead Dawn McEwen) will be making its eighth appearance in the World Financial Group Continental Cup, including the past four winning years — last year and 2014 in Las Vegas, 2015 in Calgary and 2013 in Penticton, B.C. Team Jones also was part of Team North America winning teams in 2011 at St. Albert, Alta., and 2007 at Medicine Hat, Alta.; its only loss was in 2008 at Camrose, Alta.

“We always love being a part of the World Financial Group Continental Cup, just because it’s such a unique, fun event,” said Jones. “At the same time, being a part of the larger group with Team North America is so gratifying. We see these players so often as rivals, so being teammates with them, and having the men’s teams with us, makes this event really special.”

Carruthers himself will be playing in his third WFG Continental Cup; as the second for Team Jeff Stoughton, he was a member of the winning Team North America squad in 2014 at Las Vegas, and also lost in 2012 at Langley, B.C.

“I know when we won the Home Hardware Canada Cup on Sunday night, we were excited to lock down our Trials berth, but we were just as excited to get the chance to play in the WFG Continental Cup in Las Vegas,” said Carruthers. “I’ve told my teammates that they have a lot to look forward to. Obviously, it’ll fun to play in Las Vegas, but we’re going there with the attitude that we want to help Team North America keep that trophy.”

Debbie McCormick of the U.S. is the team Captain.

Single-draw tickets are now available for $20 US apiece. Ticket information is available at https://www.curling.ca/2017continentalcup/tickets/.