One of curling’s legendary front-enders passed away on Monday night in Vancouver.

Two-time Macdonald Brier and Air Canada Silver Broom champion Jim Pettapiece died after a two-month struggle with cancer; he was 79. 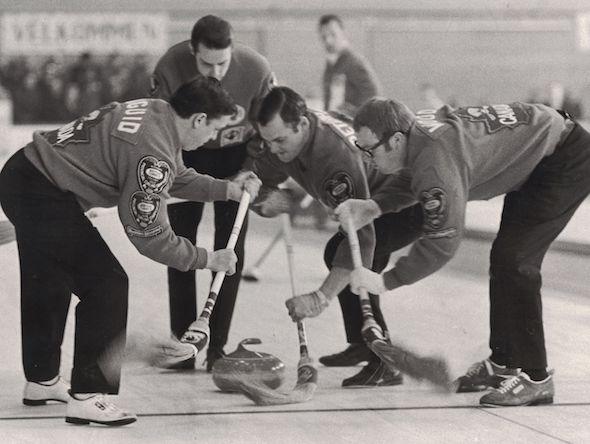 Jim Pettapiece, second from the right, sweeps a rock at the Air Canada Silver Broom with teammates, from left, Don Duguid and Bryan Wood, as Rod Hunter encourages them. (Photo, Michael Burns Sr.)

“He was a great player; him and Bryan Wood were maybe the best front end that Manitoba’s ever seen. Just outstanding,” said Duguid on Tuesday. “They both had unique deliveries; maybe a bit different than the traditional delivery, but they got the job done. Jim used to throw spinners (on his peels) and he’d clear off two or three rocks at a time. They were both very adept, and you just couldn’t beat their sweeping. Oh, they were unbelievable.”

Representing the Granite Curling Club in Winnipeg, the Duguid foursome went 9-1 to claim its first Brier title in 1970 in their hometown, then followed up with an unbeaten run to the Silver Broom title in Utica, N.Y.

A year later, the Duguid foursome repeated at the Brier in Quebec City, beating Saskatchewan’s Pee Wee Pickering in a sudden-death tiebreaker final after both teams were 8-2 in the round robin. The team then made it back-to-back unbeaten world championship gold with its win at Megève, France, in the 1971 Air Canada Silver Broom.

Through it all, said Duguid, Pettapiece was a picture of calm and poise. 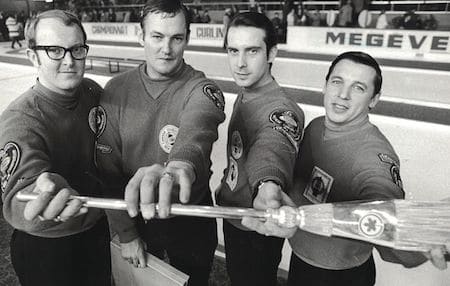 “He was pretty quiet and unassuming, but he was a great player,” said Duguid. “He was always in the game; he’d never panic. He was easygoing; you could say something to him, and he just knew what he had to do, and he’d do it.

“He was a big guy — like a buffalo coming out of the hack with a little tiny rock in his hand. But he could draw, he could finesse, he could hit. In those days, there was no four-rock, five-rock rule, and if a guy tried to put one out front, Jim could almost hit it  on the noise and still spin out the shooter because he had so much rotation on his rock.”

Pettapiece would win a third Brier Purple Heart in 1973 playing second for the Dan Fink foursome, which went 4-6 at the ’73 Macdonald Brier in Edmonton.

He also was involved in instruction; he combined with fellow Canadian Curling Hall of Famer Warren Hansen to form the Silver Broom Curling School in 1972.