Only a spirited effort from the Team World duo of Japan’s Mari Motohashi and Norway’s Christoffer Svae prevented that sweep, and they had to do it against the daunting North American wife-husband pairing of Jennifer Jones and Brent Laing — the No. 2-ranked mixed doubles pair in Canada.

The key, according to the always good-natured Svae? Just have fun.

It felt very good; it was fun to play with Mari,” said Svae, known universally in the curling world as Bompi, following a 7-5 victory Friday afternoon at the Orleans Arena. “We had a good vibe the whole way, it was a lot of fun and I think that was the key for us — to just keep it loose.” 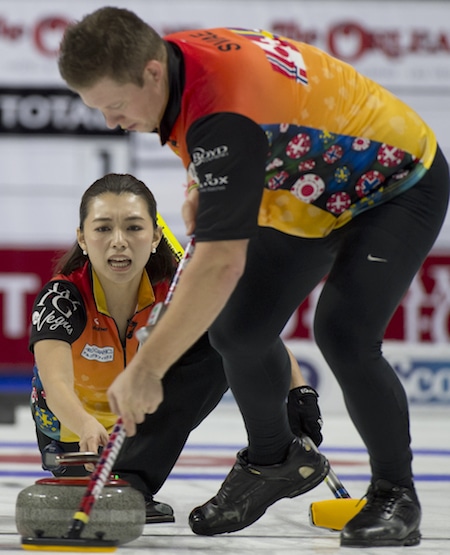 That “keep it loose” attitude applied to just about everything in the Svae-Motohashi game plan — except for Svae’s startlingly tight yoga pants. Because teams have to wear matching pants, his usual Loudmouth pants couldn’t be used in mixed doubles play and he needed to wear a black pair to match Motohashi’s.

Not that the Japanese player was complaining…

“Sexy pants! I was happy to see them!” said Motohashi with a laugh.

Team World needed to come back from an early deficit. Jones made a marvellous raise double-takeout in the second end to score a go-ahead three. But Svae’s tricky double takeout in the third set the table for Motohashi to draw for a game-tying three in the third to take back the momentum.

Despite the Svae-Motohashi victory, it was Team North America stretching its lead with a pair of victories on Friday afternoon. The results left the home team with an 8.5-6.5 lead in the overall standings; the first team to 30.5 points will win the WFG Continental Cup.

In the other games, the all-Manitoba duo of Jill Officer and Reid Carruthers scored a game-tying deuce in the fifth end, and then stole singles in the final three ends for a 7-4 triumph over Swedes Sara McManus and Christoffer Sundgren; and Calgary’s Jocelyn Peterman teamed with Chris Plys of the U.S. for a 7-5 victory over the Swiss-Danish pairing of Irene Schori and Mikkel Poulsen.

Despite the goings-on around him, Carruthers said he managed to keep his focus on his own game — always a challenge in this event. 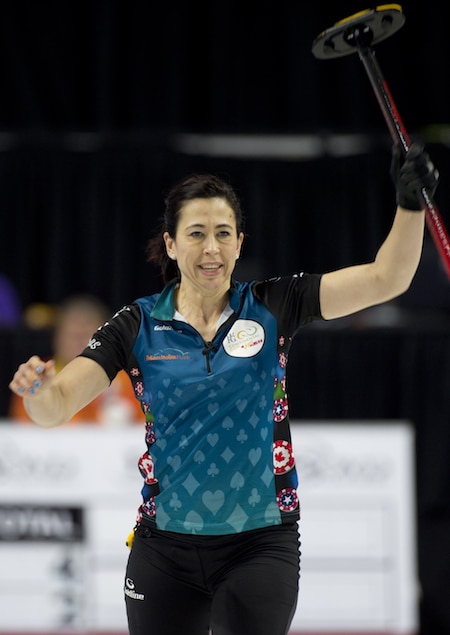 “It’s not our first barbecue; we’re both veterans, and I think we did a really good job of supporting each other and keeping our focus,” said Carruthers. “To be honest, we really didn’t know what was going on on the sheet next to us because we were so dialled in, and Jill had to make a beauty for the win. So I think we did a good job.”

Peterman and Plys, meanwhile, were able to take control with a three in the third end and a deuce in the fifth and never looked back.

“It was a good game; we had a good plan going into the game on what we were going to do, and it was lots of fun being out there,” said Peterman. “The crowd was crazy.”

The 2017 World Financial Group Continental Cup continues Friday with the fourth round of traditional team play at 6:30 p.m.