LAS VEGAS — A sleepless night in Las Vegas can mean a lot of things, but for Team North America’s Braeden Moskowy, it was the bad kind — a congested head that left him feeling miserable and unable to sleep.

But the lanky vice-skip for Reid Carruthers’ Winnipeg team wasn’t showing any effects of that head cold on Friday morning at the Orleans Arena; he made two pivotal shots in the second end of a 2017 World Financial Group Continental Cup, presented by Boyd Gaming, showdown against red-hot Niklas Edin of Sweden that led to a game-turning three count, leading Team Carruthers to a 7-4 victory.

“That was awesome, huge,” said Moskowy, who along with teammates second Derek Samagalski and lead Colin Hodgson is playing in his first WFG Continental Cup (Carruthers played in the 2014 edition, also in Las Vegas. “Edin is probably the best team in the world this year so we knew we had our hands full. But we came out, we were sharp, we made a lot of shots and got a few misses from them, which was big. And Chels got it done in her game with a big win against a team she struggled against at the Worlds last year. So to get two wins out of three and take the lead, we’re pretty happy with that.”

Moskowy shot a blazing 94 per cent despite his head cold, and the two shots in the second end — a precision inturn freeze followed by an outturn double-takeout — turned the game in Carruthers’ favour. 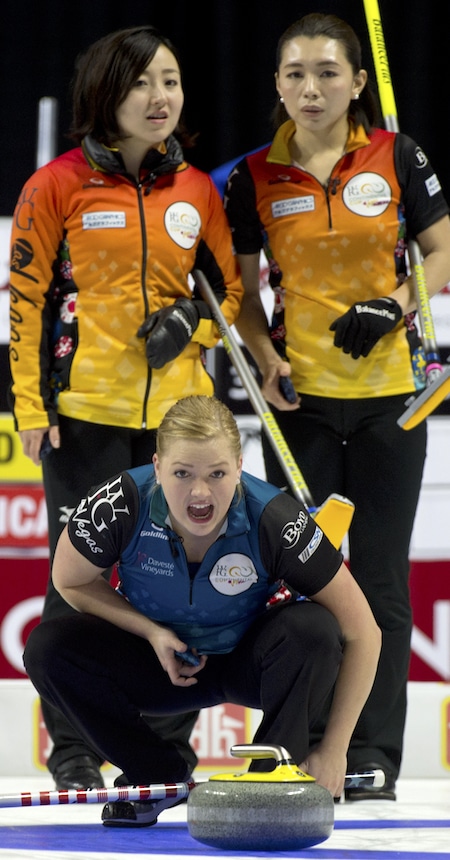 “You hear about athletes like Michael Jordan being sick in a game and scoring 60-something points; it’s just one of those things where you’re not really overthinking things because your brain’s not really working,” said Moskowy with a chuckle. “Just go out, try to throw the rock half-decent; the boys put some good scrubs on it, Reid called the line good and I was able to make a couple big ones.”

Carey’s team broke open a tight game with Feltscher by scoring four in the seventh end, and followed up a victory in team play on Thursday night.

“Every time you step out on the ice, you want to scratch and claw for every point you can, so I think we’re pretty happy about that,” said Carey’s vice-skip Amy Nixon. “Now we get the rest of the day off and it’s time to cheer.”

In the other traditional team game on Friday morning, Team World’s Satsuki Fujisawa of Japan scored back-to-back deuces in the fifth and sixth ends for an 8-3 victory over Team North America’s Jamie Sinclair of the U.S.

The 2017 World Financial Group Continental Cup continues Friday with a mixed doubles draw at 1:30 p.m. (all times PST) and a traditional team-play round at 6:30 p.m.