LAS VEGAS — As far as Chelsea Carey is concerned, the timing couldn’t be better for her team to be rounding into championship form.

It’s been a struggle so far this season for the reigning Scotties Tournament of Hearts champion skip and her Calgary team — third Amy Nixon, second Jocelyn Peterman, lead Laine Peters — but three straight wins in team competition this week at the 2017 World Financial Group Continental Cup, presented by Boyd Gaming, have the team feeling the same kind of confidence it showed en route to the Scotties title last February in Grande Prairie, Alta.

“We needed this, right?” said Carey, moments after a 6-5 win over Sweden’s Anna Hasselborg Saturday afternoon at the Orleans Arena — part of a Team North America sweep of the three team games. “We’ve had times this year where we felt pretty good, but coming off a tough one last week (three losses at the Grand Slam Meridian Canadian Open), we needed to come in here and get some good things happening. And it’s so fun to do it at this event; you have the whole bench cheering you on and that adds a nice extra bonus.”

With 60 points available, the first team to 30.5 points will claim the WFG Continental Cup; a total of 30 points are available in two rounds of skins play on Sunday.

Carey’s team is assured a spot in the 2017 Scotties Tournament of Hearts in St. Catharines, Ont., Feb. 18-26, as Team Canada, but its season to date (a 24-30 overall record before Las Vegas) hasn’t inspired a lot of confidence. But like the Tim Hortons Brier champions, skipped by Kevin Koe, the inconsistency during the fall and early winter has been long forgotten at the Orleans Arena.

“It feels great; apparently we should have been playing Continental Cup format all year,” said Carey with a laugh. “We’ve been telling everybody that our team and their team (Koe) had a strategy, that we were just going to hustle everyone all season so we could pull out a win at the Continental Cup. But it does feel good to kind of get it turned around, put some shots together and get some wins.”

“The skins day, there are so many points up for grabs and anything can happen,” said Jones. “So you want to take as big of a lead as you can into that last day. We’ve been here before when we’ve lost and it’s not a lot of fun, so we want to do our best to put as many points on the board as we can.”

Here’s how the captains and coaches set their lineups for the skins games: 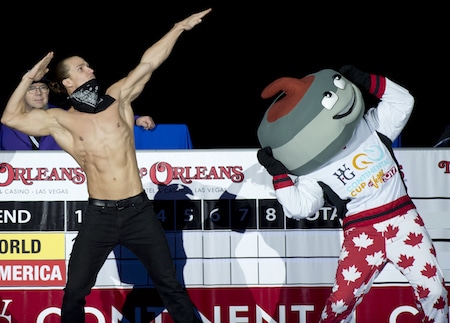 Slider had some company on Saturday! (Photo, Curling Canada/Michael Burns)