LAS VEGAS — It now appears to be only a matter of when — not if — Team North America nails down its fifth consecutive victory at the World Financial Group Continental Cup, presented by Boyd Gaming.

The home team came tantalizingly close to nailing down the victory on Sunday afternoon at the Orleans Arena in skins play, taking eight of the available 15 points. That left Team North America leading Team World 27-18 in the overall standings, and just 3.5 points way from clinching victory.

Barring a collapse of historic proportions, Team North America will stretch its win streak to five sometime early this evening; the final skins draw, with the final 15 points up for grabs, is scheduled for 6:30 p.m. PT.

“It’s just fun to win — it doesn’t matter where, when, how quickly,” said Team North America’s Marc Kennedy, after skipping a Team North America mixed team consisting of vice-skip Jamie Sinclair, second Ben Hebert and lead Monica Walker to a 3-2 win over Team World’s Torger Nergård, third Irene Schori, second Håvard Vad Petterson and lead Christine Urech. “It’ll just be exciting to be out there tonight, cheering everybody on, and hopefully we can finish it off.” 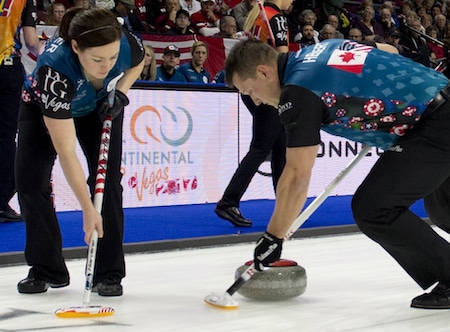 “We’re in Vegas, and the odds are probably against us,” admitted Stjerne, who’ll be cheering on his Team World ’mates from the bench tonight “But I think we’re going to go for it. Try to get going in one game early on, and hopefully everything else falls into place.”

For Kennedy — normally the vice-skip for Kevin Koe’s Calgary team — it was an enjoyable return to shot-calling duties. Even more fun, he said, was watching Hebert, the lead for Team Koe, throw takeouts in the second position.

“He’s a good hitter, he can throw the rock hard,” said Kennedy, before adding with a laugh: “He does sweat a lot, though. I couldn’t stop laughing at how big his hair was. But you never get a lack of effort from him. He was excited, he made it a lot of fun, he made the girls feel comfortable, and I wouldn’t want to be out there with anyone else but him.” 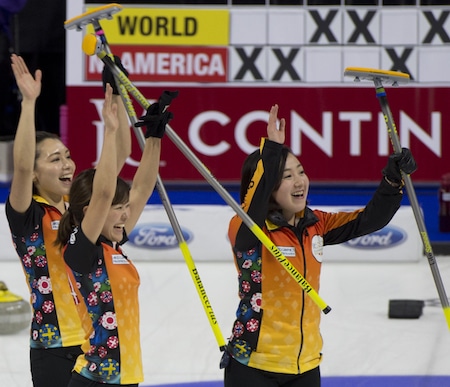 Here are the matchups for the final round of skins competition: