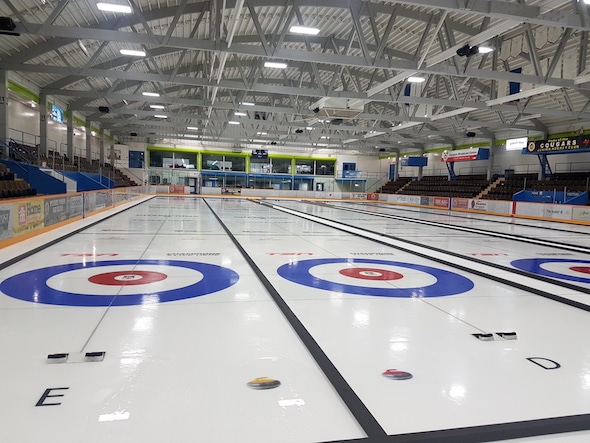 It’ll be a Canadian Juniors filled with both experience and prominent bloodlines as the country best young curlers battle the right to represent Canada at the World Juniors in South Korea.

Topping the women’s field is British Columbia’s Corryn Brown of Kamloops, who, along with Sam Fisher, won the 2013 Canadian Juniors at Fort McMurray, Alta. Brown is also a two-time silver medallist at the CIS-CC University Championships. Other team members are third Marika Van Osch and second Dezaray Hawes, who won silver last year in the Juniors at Stratford, Ont.

Three players on last year’s winning team from Chester, N.S., have also returned. Kristin Clarke, Karlee Burgess and Janique LeBlanc were skipped last year by Mary Fay, when they also went on to capture gold at the World Juniors in Tårnby, Denmark.

Some famous curling names are also prominent. Saskatchewan third Sara England is the daughter of Shannon England and 1998 Olympic gold-medallist Sandra Schmirler. Manitoba skip Laura Burtnyk is the daughter of two-time Brier and one-time world champion skip Kerry Burtnyk, while her vice-skip, Hailey Ryan, is the daughter of Jeff Ryan, who played the same position for Burtnyk when winning the 1995 Brier and Ford Worlds.

On the men’s side, last year’s silver-medal team, skipped by Tanner Horgan of Northern Ontario, has returned intact.

B.C. is represented once again by skip Tyler Tardi, who won a bronze medal at last year’s Juniors, losing the semifinal to eventual gold-medallist Matt Dunstone of Manitoba.

Quebec skip Vincent Roberge and second Étienne Elmaleh are sons of François Roberge and Maxime Elmaleh, who played third and lead respectively, for Jean-Michel Ménard when they won the 2006 Tim Hortons Brier and a silver medal at the World Men’s.

However, it will be the sixth time British Columbia has staged the combined Canadian Juniors. In addition to Victoria in 2004, previous sites were North Vancouver in 1988, Vernon in 1992, Kelowna in 1999 and Salmon Arm in 2009. Prior to 1987, the Canadian Junior Women’s Championship was played at Fort St. John in 1984, at Chilliwack in 1978 and at Vancouver in 1971, while the Canadian Junior Men’s Championship was in 1971 at Kamloops, 1961 at Prince George and 1951 at Nelson.

The Archie Browning Sports Centre, a facility containing an arena and a curling club, is located in Esquimalt, a suburb of Victoria.

For the women, the 14 teams (representing each of the 10 provinces in addition to Northern Ontario, Northwest Territories, Yukon and Nunavut) will be split into two seven-team pools, with seeding based on win-loss records in the 2016 Canadian Juniors at Stratford. Teams will play a round robin within their pool, after which the top four in each pool advance to a Championship Pool from Wednesday through Friday, carrying forward their full won-lost records.

For the men, since Yukon is not represented this year, they are split into one seven-team and one six-team pool. Following the round robin within their pool, the top four teams in each also advance to the Championship Pool but will carry forward only their won-lost records amongst the qualifiers.

At the conclusion of the games in the Championship Pool for both genders, the first-place teams advance directly to Sunday’s finals, while the second- and third-place finishers meet in semifinals on Saturday to determine the other finalist.

Teams that don’t qualify for the Championship Pool will compete in a Seeding Pool to determine rankings for the 2018 Canadian Juniors at Shawinigan, Que. The non-playoff teams will also participate in a mixed doubles competition on the final weekend.

The winning teams will then represent Canada in the 2017 VoIP Defender World Junior Curling Championships at Gangneung, South Korea. Canada has won a leading 18 world junior men’s titles since 1975 and 11 women’s crowns since 1988. The World Juniors will also be the official test event for the 2018 Winter Olympics curling competition.

B.C. teams have won eight Canadian junior championships — the most recent being the aforementioned Corryn Brown. Other previous winners were Brad Kuhn in 2000 at Moncton, N.B., Dean Joanisse in 1989 at Winnipeg, Mike Wood in 1988 at North Vancouver, Julie Sutton in 1987 at Prince Albert, Jodie Sutton in 1986 at Rouyn-Noranda, Que., Sandra Plut in 1982 at Winnipeg and Jerry Laughlin in 1961 at Prince George.

The Canadian Junior Menʼs Championship has been contested annually since its inception in 1950 in Quebec City. The first Canadian Junior Womenʼs Championship was played in 1971 at Vancouver. Alberta has won a leading 16 Canadian junior men’s titles while Saskatchewan leads with 11 women’s titles. The men’s and women’s championships were contested in different cities until being combined in 1987 at Prince Albert, Sask.