VICTORIA — By now, this is familiar territory for Sara England. Different last name, of course, but that legacy of her mother, the late Sandra Schmirler, is never far from her. 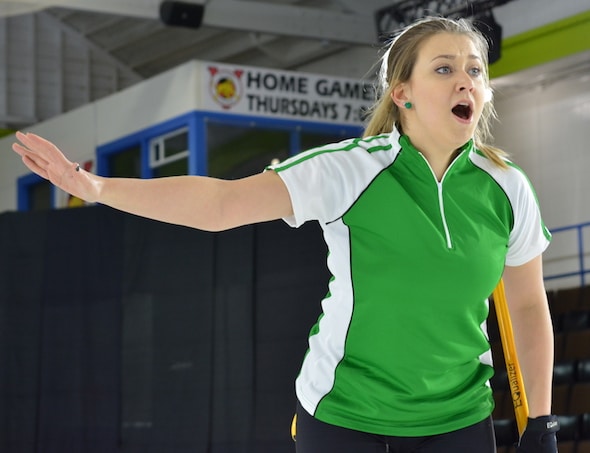 So, as she stepped off the ice Sunday morning at the Archie Browning Sports Centre, moments after her Saskatchewan team, skipped by Kaitlyn Jones, narrowly escaped with a 7-4 win over Manitoba’s Laura Burtnyk, just like her mom would have, the talk was about curling. To begin with, anyways.

“A lot of highs and lows,” said England, the vice-skip for Jones’s Saskatchewan team from Regina, which improved to 2-0 with the victory at the 2017 Canadian Junior Curling Championships, presented by Ambrosia Apples. “I didn’t have my best game, but my team had a very good game; Kaitlyn was throwing amazing. We just happened to get a miss on their last one (Burtnyk flashed on an open hit for the victory) to get the win. That’s how curling goes; you never know what’s going to happen.”

That saying doesn’t just apply to curling, of course, as Sara and her family know very well. When Sara was just two, Schmirler, the 1998 Olympic gold-medallist and a three-time world champion, died of cancer.

A tattoo on the forearm of Sara England. (Photo, Curling Canada/Al Cameron)

Sara’s memories of her mother are fleeting at best, but she is in touch with her legacy in many ways. She works with her dad, Shannon England, and younger sister Jenna with the Sandra Schmirler Foundation, which raises funds for newborn intensive-care units in hospitals across Canada.

And, on the forearm of her right rm is a small printed tattoo: “Part of your world,” a song from the movie The Little Mermaid.

“When I was two and my mom was in the hospital, she would send us voice recordings, and one of the recordings was her singing ‘Part of Your World,’ ” said England. “And I got the tattoo in my dad’s printing so that I would have both of my parents involved.”

Shannon England is here this week watching his daughter perform with Jones, second Rayann Zerr, lead Shantel Hutton and coach Susan Lang; and, yes, there are memories of her mom here as well.

“Her teammates came to our sendoff and they told us little bits and pieces of how they did things as a team, how they felt their success came,” said Sara England. “We brought their special cowbell they bought in Switzerland; their mascot, which is a little rat that squeaks. Just those little things — she’s here with me, I feel it. Curling is just a part of who we are as a family — carrying that on at this level is just absolutely amazing.”

And, yes, England is well aware that people will compare her to her mother (they’re both yellers on the ice, for instance).

“I would hope people don’t hold me to different expectations,” she said. “I’m not her; I’m my own curler, right? I’m her daughter, and people say it’s in the blood, but it’s just a sport.”