Team B.C. men shine on and off the ice at 2017 Canadian Juniors

Tyler Tardi’s focus this week is on the ice at the Archie Browning Sports Centre, as he chases gold at the 2017 Canadian Junior Curling Championships, presented by Ambrosia Apples. 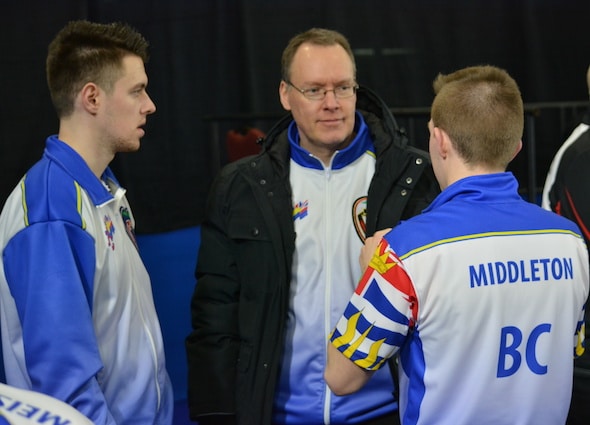 But the 18-year-old skip and his team from the Langley and Royal City (New Westminster) curling clubs are also aware of the big picture, and that curling can open a lot of doors in a lot of ways.

On Friday, for instance, Tardi and his team — vice-skip Sterling Middleton, second (and older brother) Jordan Tardi, lead Nick Meister and coach Paul Tardi (Tyler and Jordan’s dad) — paid a visit to nearby Craigflower Elementary School. A former teacher of the Tardi brothers, Michelle MacFarlane, is now the principal of the school, which is located on the traditional territories of the Esquimalt and Songhees Nations and has a large indigenous population.

“We walked in and all the kids were waiting for us when we got there; they were all excited — ‘Oh, it’s Team B.C.,’ ” recalled Tardi on Monday, moments after a 5-4 win over Ontario’s Matthew Hall (2-1; Kitchener) that left B.C. still unbeaten at 3-0. “For a lot of them, it was their first exposure to curling. It’s nice to get the word out about our sport.”

Many of those kids will return the favour on Tuesday morning when they visit the Archie Browning Sports Centre to watch B.C. play Northern Ontario’s Tanner Horgan in a crucial round-robin game at 9 a.m. (PST).

“The kids are absolutely excited about coming to the game tomorrow,” said Craigflower vice-principal Jana Dick. “The B.C. team were great ambassadors; the kids loved them.”

That’s just an example of Team Tardi being not just great curlers (three-quarters of the team won bronze at the 2016 Canadian Juniors, while Tyler Tardi and Sterling Middleton joined with Nova Scotians Mary Fay and Karlee Burgess to win gold at the 2016 Youth Winter Olympics in Norway) but great citizens, too.

“It just feels good to give back,” said Tardi. “A lot of people give to us, and it’s always a good feeling to give right back.”

A year after taking bronze, the B.C. team arrived in Victoria with expectations, a situation it’s embracing.

“Well, we like the pressure, especially being the home-province team,” said Tardi. “And we really like playing with pressure; it feels good, it pumps us up, which we like. But I wouldn’t say there’s a big target; there are around six teams here who are pretty much even.”

In other men’s games Monday afternoon, Manitoba’s JT Ryan (Winnipeg) improved to 4-0 in his bid to make it five straight Canadian junior men’s titles for his home province, scoring three in the extra end for a 9-6 win over Quebec’s Vincent Roberge (0-4; Lévis); Northern Ontario’s Horgan foursome (3-1; Copper Cliff) broke the game open with a steal of three in the fifth end en route to a 12-4 win over Nunavut’s Arthur Siksik (0-3; Rankin Inlet); and New Brunswick’s Liam Marin (3-1; Saint John) rolled to a 9-3 win over Sawer Kaeser of the Northwest Territories (0-4; Fort Smith).