Northern Ontario teams off to playoffs at 2017 Canadian Junior Championships

VICTORIA — Ten minutes after the game, there was still a look of disbelief on the face of Northern Ontario skip Krysta Burns. 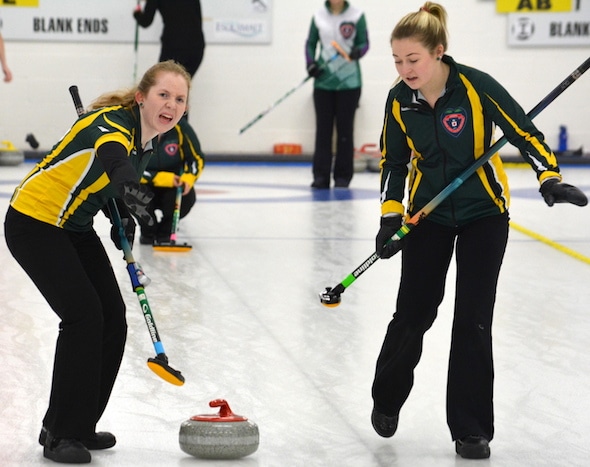 The 20-year-old science student — skipping a team full of science students — had just beaten Prince Edward Island’s Lauren Lenentine (Cornwall) in the final round-robin draw of the 2017 Canadian Junior Curling Championships, presented by Ambrosia Apples, to clinch a semifinal berth with a 7-3 record, and was still coming to grips with what her Sudbury team had just accomplished.

“It’s kinda hard to breathe,” marvelled Burns. “We knew it could be a possibility, but we knew it would be tough, so the fact that we got this far is incredible. We know all the teams here are so good, so to be in the top of this amazing field is just incredible. It feels wicked.”

That’s a feeling shared by many today in the north country of Ontario; it’s the first time since the Canadian Junior Men’s and Women’s Championships were combined in 1987 that two Northern Ontario teams have made the playoffs; 2016 silver-medallist Tanner Horgan and his team from Copper Cliff also will play in the semifinal on Saturday after a 6-3 win over New Brunswick’s Liam Marin (Saint John).

“It really is a great time to be a Northern Ontario curler,” said Burns, who will take on Alberta’s Kristen Streifel (Edmonton) in the women’s semi Saturday at 1:30 p.m. (all times PST). “Sometimes we have our naysayers, but we’ve clearly proven that we belong here, and that we’re all good teams that can be at the top of the field.”

“This is absolutely huge,” added Horgan, whose team will play in the men’s semi Saturday at 5:30 p.m. against the winner of a 2 p.m. Friday tiebreaker between Ontario’s Matthew Hall (Kitchener) and Manitoba’s JT Ryan (Winnipeg) after the teams finished deadlocked for the third and final men’s playoff berth. “I can’t remember the last time when we had both teams in the playoffs. This is great for our junior teams back home. And I hope it can help build the programs.”

The semifinal winners will advance to Sunday’s gold-medal games against the round-robin pool winners: Ontario’s Hailey Armstrong (Ottawa) will be in the women’s final at 9 a.m., while B.C.’s Tyler Tardi (Langley/New Westminster) will play in the men’s final at 1:30 p.m.

The Northern Ontario women have a bit of a break now in the schedule before the semifinal, so perhaps there will be some time spent on schoolwork. All four players study science at Laurentian University — Burns is majoring in forensic science; vice-skip Megan Smith studies biomedical biology; second Sara Guy is enrolled in the nursing program; and lead Laura Masters takes biochemistry.

“We’ve been trying to do school work, but our school workload and curling workload have been difficult to manage,” said Burns with a laugh. “But clearly we’re doing something right.”

TSN/RDS2, the official broadcaster of Curling Canada’s Season of Champions, will provide live and exclusive coverage of the womenʼs and menʼs semifinals on Saturday and finals on Sunday. The same games also will be streamed live in the U.S. on ESPN3.