VICTORIA — It’ll be an Alberta-Ontario women’s final on Sunday at the 2017 Canadian Junior Curling Championships, presented by Ambrosia Apples. 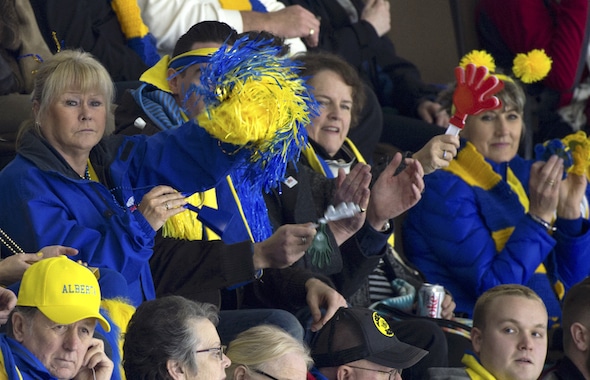 Alberta fans had plenty to cheer about on Saturday. (Photo, Curling Canada/Michael Burns)

As a result, it will be Alberta taking on unbeaten Hailey Armstrong of Ontario (Ottawa) for gold Sunday at 9 a.m. (all times PST).

“We definitely were ready to play,” said Streifel, 21, who’s at her first Juniors representing Alberta after three previous trips skipping Saskatchewan teams. “We had a really good pregame practice, we were confident with the ice and we knew we just needed to get some points up there, and just gets some rocks in play after that.”

It worked out exactly that way as Alberta took control of the game with back-to-back deuces in the fifth and sixth ends. Burns was heavy with her draw in the fifth end looking at two Alberta counters, and then in the sixth, Burns was trying a nose hit of an Alberta stone that was angle-frozen to one her own But she was wide with her throw, lost her shooter as well as her other rock and left two Alberta rocks in the rings to make it 5-1 Alberta.

And it got worse an end later when Northern Ontario had a hit to potentially score three, but Burns was wide with her delivery resulting in a jam and yet another steal for Alberta that basically put the game out of reach.

“We didn’t actually play that bad,” said Burns, who along with vice-skip Megan Smith, second Sara Guy, lead Laura Masters and coach Rodney Guy will take home a bronze medal. “We just missed the wrong shots at the wrong times. But we’re super proud of how far we’ve come and what we’ve done here, and it was a good last year (of junior) for me.”

Ontario was a 7-3 winner over Alberta in the final round-robin game for both teams on Friday morning, and Streifel is well aware that it will take a special effort from her team to take down the red-hot Armstrong team (vice-skip Grace Holyoke, second Lindsay Dubue, lead Marcia Richardson, coach Bill Rogers).

“Quite honestly, I think tomorrow is a fresh day,” said Streifel. “We just had one or two ends go the wrong way for us, but other than that it was a close game for us. I’m looking forward to it; they’ve obviously proven themselves all week, so we’re just going to have to focus on our game and hopefully we can get the momentum on our side and go from there.”

Alberta is chasing a fourth Canadian title in the past six years; Jocelyn Peterman won in 2012 at Napanee, Ont.; and Kelsey Rocque prevailed back to back in 2014 in Liverpool, N.S., and 2015 in Corner Brook, N.L.

St. Laurent coached Rocque (whom St. Laurent’s dad Garry is now coaching at the Winter Universiade in Kazakhstan) to not just those back-to-back Canadian titles, but world titles as well, so knows a thing or two about how to prepare a team for a big game, and what kind of message to deliver. It will, she vowed, be a simple one.

“We prepared, we’ve done the practice, we put the time in,” said St. Laurent. “Just go out there and have fun, and enjoy every moment.”

The winner will take on B.C.’s Tyler Tardi (Langley/New Westminster) for gold Sunday at 1:30 p.m.

TSN/RDS2, the official broadcaster of Curling Canada’s Season of Champions, will provide live and exclusive coverage of the menʼs semifinal on Saturday and finals on Sunday. The same games also will be streamed live in the U.S. on ESPN3.