Kristen Streifel won’t be making her first trip to South Korea, but this one will last a little longer than the few hours she spent at the airport in Seoul. 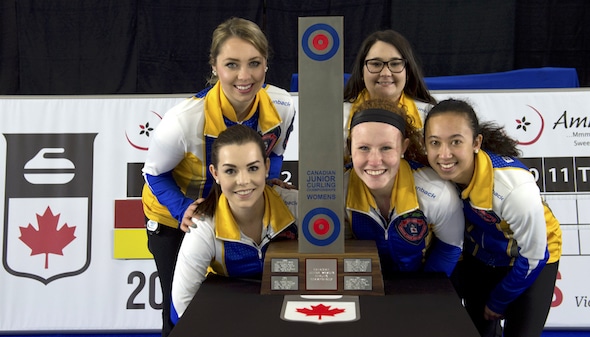 The 21-year-old Team Alberta skip will be headed back to South Korea next month — this time as the skip of Team Canada, after winning the women’s gold-medal game Sunday morning at the 2017 Canadian Junior Curling Championships, presented by Ambrosia Apples.

Streifel stole the winning points in the 10th end at the Archie Browning Sports Centre when Ontario skip Hailey Armstrong’s last-gasp draw-tap attempt to remove Alberta stone buried at the top of the button was heavy.

“Oh my goodness, words cannot describe the feeling,” said an ecstatic Streifel, in her first Canadian juniors skipping Alberta after three previous trips skipping Saskatchewan “I’ve dreamed of this moment for so many years, and to have it happen this week is just incredible.”

It was a nailbiter to the very end; five of the first seven ends were blanked, with Ontario — unbeaten entering the final — scoring a deuce in the third while Alberta matched it in the sixth.

Then the teams traded singles in the eighth and ninth ends, giving Ontario the hammer tied up coming home — a scenario, ironically, that the Albertans had practised for regularly leading up to the Canadian Juniors.

“Oh, yes — that’s what Monday practices are for,” said Streifel with a smile. “We don’t mind that scenario. Actually, we prefer it sometimes. We like to put a little pressure on the other teams, and we know that if we just focus on placing our rocks in the right spot, the rest will take care of itself. It was a battle in the 10th end, that’s for sure.”

It was indeed, and the tide turned for Alberta got a rock buried at the top of the button behind cover, and Streifel was able to add a second guard with her final delivery, leaving Armstrong with a next-to-impossible shot to salvage the winning point.

“I think it was a really well-played game; we just had a couple misses that were kind of crucial,” said Armstrong, whose silver-medal team was rounded out by third Grace Holyoke, second Lindsay Dubue, lead Marcia Richardson and coach Bill Rogers. “The shot at the end was really hard; it was overburied. But we gave it our all at the end. This team has been together for one year, and I think we did pretty well, coming second and going 10-and-1.”

Streifel will be making her second trip to the world juniors; she was an alternate for Alberta’s Kelsey Rocque’s gold-medal team in 2015 in Estonia.

St. Laurent, meanwhile, coached Rocque to gold in both 2014 and 2015 and will be making her third trip to the World Juniors, where Canada will be pursuing its fourth consecutive gold after Mary Fay won last year in Switzerland.

Before then? Suffice it to say, there will be some schoolwork on the agenda for Streifel and co.

“That’s going to be interesting,” said Streifel, a kinesiology student. “University has been put a little bit on the back burner this week. Hopefully we can get some midterms done this week before we get on the plane to Korea.”

It was Alberta’s ninth Canadian junior women’s title, and fourth in the past six years. The nine titles matches Manitoba’s output, and trails only Saskatchewan with 11.