Ontario teams have shot at sweep at 2017 Canadian Junior Championships

Matt Hall’s preparation for the 2017 Canadian Junior Curling Championships went well beyond the work he did in practice, throwing rock after rock. 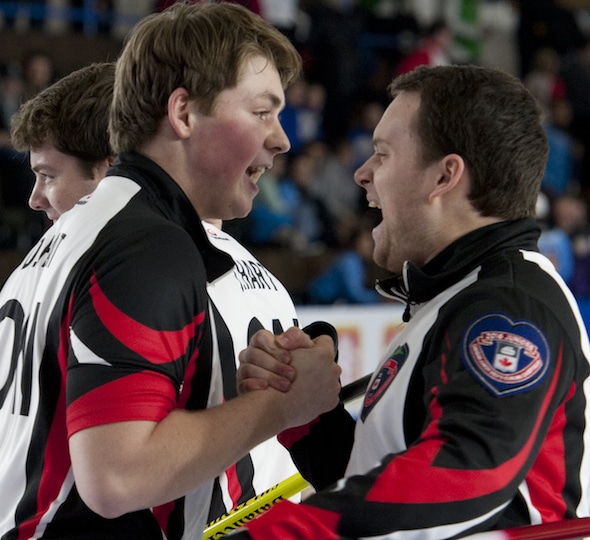 The 19-year-old skip of Team Ontario did work away from the curling rink as well, even going so far as getting his body used to B.C. time by going to bed and getting up a few hours later than usual to deal with the three-hour time difference.

The advance work is paying off this week as Hall’s team from Kitchener — vice-skip Jeff Wanless, second Joey Hart and lead David Hart — will play for a gold medal on Sunday afternoon at the 2017 Canadian Junior Curling Championships, presented by Ambrosia Apples.

Horgan was attempting a tough double takeout that, best-case scenario, was going to hold Ontario to a deuce. But he wrecked on a guard to give Hall the open look at a draw for four.

Northern Ontario would tie the game with a 10th-end deuce, but Hall got two perfect tick shots from David Hart that kept the house open, and in the end, Hall had an open hit for the victory.

“We knew we were still in it, we knew it was a game, we had patience,” said Hall of being down 3-1 to Northern Ontario at the fifth-end break. “We were just going to wait them out as long as possible until we got our chance, and we got that chance in the seventh end. We made a couple shots, they had a couple half-shots that just didn’t quite get where they wanted them to, and we made it a good end.”

Both Ontario teams will be playing for gold on Sunday; the Ontario women’s team from Ottawa, skipped by Hailey Armstrong, will take an unbeaten record into the women’s gold-medal game against Alberta’s Kristen Streifel at 9 a.m.

“It’s been an amazing week; no matter how this week ends, we’ve got nothing to be ashamed of,” said Hall. “It’s always been a dream of mine to have that shot having a  Maple Leaf on my back, and I’m so happy I’ll have the chance to do that tomorrow.”

“It’ going to take a while to get over this, to be honest,” said Horgan. “We’ll do our best at the provincial men’s; hopefully we’ll get a good finish there and feel positive about the season.”

One province has claimed both the men’s and women’s titles in the same year on eight previous occasions: Alberta (Jocelyn Peterman and Brendan Bottcher) in 2012; Ontario in 2010 (Rachel Homan and Jake Walker); Saskatchewan in 2003 (Marliese Miller and Steve Laycock); Manitoba in 1995 (Kelly Scott and Chris Galbraith), 1984 (Darcy Kirkness and Bob Ursel) and 1981 (Karen Fallis and Mert Thompsett); and Alberta in 1978 (Cathy King and Darren Fish) and 1977 (Cathy King and Paul Gowsell).

B.C. was a 5-4 winner in their round-robin encounter, a game that went down to the wire.

“We have to come out with our best stuff tomorrow; we know they will,” said Hall. “It should be a good game, and we’re to play 10 or 11 more good ends if that’s what it takes.”

“They’ve been gaining confidence all week long,” added Bushfield. “They’ve had setbacks, and you need them to learn how to dig deeper, so I think they’re ready.”

TSN/RDS2, the official broadcaster of Curling Canada’s Season of Champions, will provide live and exclusive coverage of the menʼs semifinal on Saturday and finals on Sunday. The same games also will be streamed live in the U.S. on ESPN3.