Another win for Squires at Winter Universiade

Team Canada’s Aaron Squires faced two tough opponents on the second day of competition at the 2017 Winter Universiade in Almaty, Kazakhstan, losing a close morning match to Great Britain, but battling to a 5-4 win over Russia on Tuesday night. 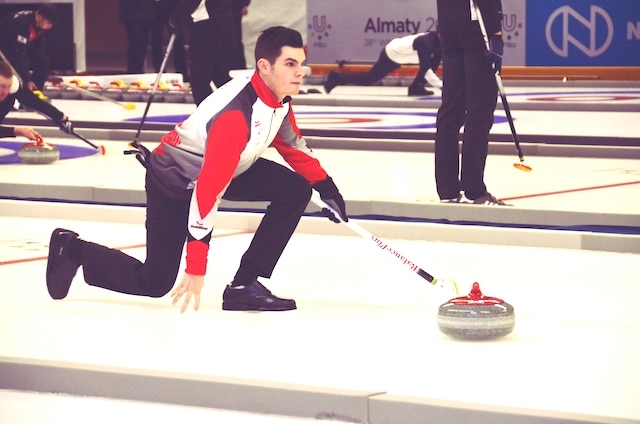 Team Canada skip Aaron Squires follows his shot down the ice during competition at the 2017 Winter Universiade in Almaty, Kazakhstan (Marc Bartschat photo)

Squires and his Wilfrid Laurier Golden Hawks team of vice-skip Richard Krell, second Spencer Nuttall, lead Fraser Reid, alternate Russell Cuddie and coach Jim Waite got off to a slow start against Great Britain’s Bruce Mouat, the 2016 World Junior Men’s champion, giving up three in the first end on the way to a tough 9-4 loss. “It’s definitely a little deflating when you start out like that. You never want to give up a three, even a deuce to start the game,” said Squires after the loss. “Then you have to get a little more aggressive to make up for it, but you don’t want to be too aggressive and allow them to take an even bigger lead. We stuck in there as best as we could and played as conservative as possible but they ended up cracking that big one at the end. Hopefully we’ll come back and play a little better tonight.” Team Canada bounced back against Russia’s Alexey Timofeev in the evening game. With the score tied 4-4 after eight ends, Squires blanked the ninth and took a single in the final end to seal the 5-4 victory. “We played a much more aggressive game this morning, and we weren’t making shots, so tonight we dumbed it down a little bit,” said coach Waite afterwards. “Everybody was making everything tonight, and we were in control. We’ll probably continue playing more conservative for a while.” “It got a little dicey there, in the eighth end but we escaped with what we wanted, conceding only one. We were in control the rest of the way,” said Squires. With the win, Team Canada men now have a 2-1 record. They will face USA’s Alex Leichter (3 a.m. EST) in their only game on Wednesday. On the women’s side, University of Alberta Pandas skip Kelsey Rocque and her team of vice-skip Danielle Schmiemann, second Taylor McDonald, lead Taylore Theroux and coach Garry Coderre stole a crucial point in the fifth end against Sweden’s Isabella Wranaa to earn a 5-3 win. “Losing that first game (against China in the first draw of the round robin) kind of fired us up and made us realize that we have to play our best against every team here,” Rocque said after the win over Sweden. “We’re playing really well now. It’s nice to get a few wins under our belt. I think every game is going to be pretty crucial from here, so we have to keep our level of play up.” Coach Coderre agrees that the Canadians are back on track. “There was definitely some rust in our opening loss against China,” he said. “We saw today that this team is very good and very relaxed in tight games. Some teams are not very comfortable in a pressure environment, but these girls definitely are. I have full confidence in this group.” 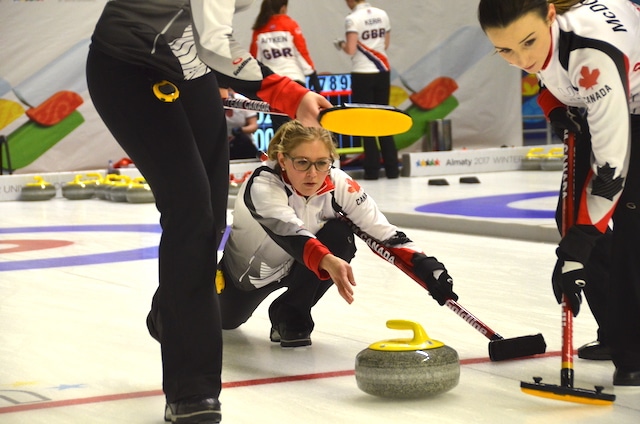