It was a good day for Canada at the 2017 World Junior Curling Championships as both Kristen Streifel and Tyler Tardi posted strong wins at the Gangneung Curling Centre in Gangneung, South Korea. 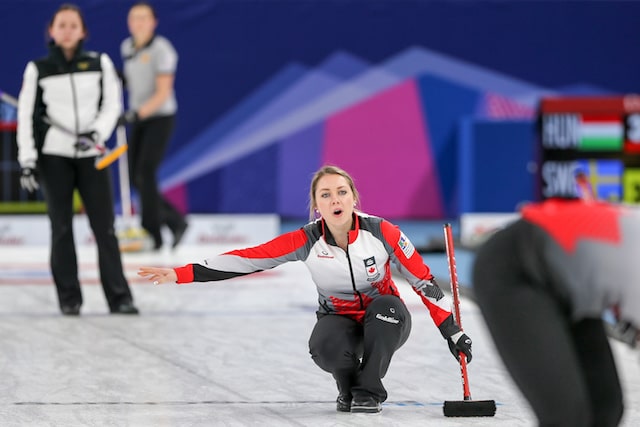 Streifel and her Edmonton-based team of vice-skip Chantele Broderson, second Kate Goodhelpsen, lead Brenna Bilassy, alternate Karlee Burgess and coach Amanda Dawn St. Laurent moved into a tie for first place with a solid 8-3 win over Russia’s Maria Baksheeva. “I’d have to say that was one of our best games yet,” said Streifel. “We played really solid at every position and we played really well as a unit. Our front end had one of their strongest games yet, and they did really well to set up the ends, and then we were able to carry through with the back end. It just made things a lot easier.” National Junior Coach Melissa Soligo, who is with the team in South Korea, couldn’t agree more. “This was the best game yet for the girls,” she said. “It was strong play – get two, give one. They didn’t take their foot off the pedal the whole game. It was fun to watch. There were some awesome team shots.” Tardi and his B.C. team from Langley/New Westminster (vice-skip Sterling Middleton, second Jordan Tardi, lead Nick Meister, alternate Nicholas Rabl, coach Paul Tardi) had to come up with some big shots to defeat Norway’s Magnus Ramsfjell 8-5 on Monday afternoon in Gangneung. “We didn’t sign up for this to have an easy run, so that was exactly what we were expecting,” said Tardi. “And we’re expecting a lot more to come. It’s good to be here and have a challenge. You want to win with a lot of fight and I think we’re doing that.” In the second end, with Ramsfjell’s first shot nailed to the button, Tardi threw a high-powered run-back double to clear the four-foot and set up his deuce. But in the third, he gave up three points when a failed hit-and-roll attempt left Ramsfjell an open hit. Tied 5-5 at the break, the Canadians stormed back with two steals and finished off the game with another steal in ten for the 8-5 win. “We had a bit of a slow start in that game,” admitted Tardi. “But we had a good talk with our coach at the fifth-end break and he brought us all back together as a team, so props to him.” 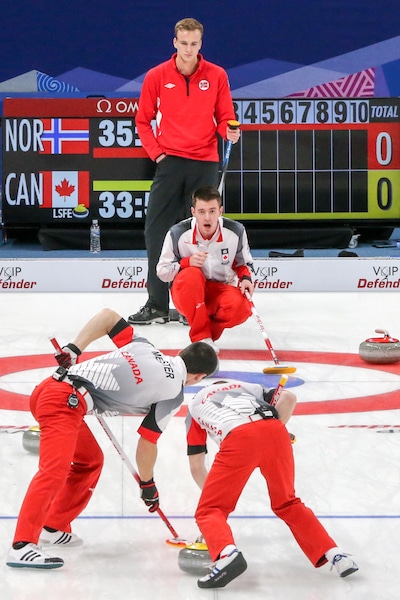 With the win, Tardi moves into second place in the standings, tied with Norway with a 4-2 record, and trailing undefeated South Korea. Streifel now sits at the top of the standings, sharing a 5-1 record with Scotland and Sweden. “Just one game at a time right now,” she said, looking ahead. “We’re just building our momentum and are going to keep it that way. We’re still getting a feel for the ice and rocks as we go, and trying our best every game.” The round robin continues on Tuesday with both teams playing just one game. Streifel faces Japan’s Misaki Tanaka (12 a.m. EST) and Tardi will play Switzerland’s Jan Hess (5a.m. EST). Event information, including news and live scoring, are available at the event website, www.worldcurling.org/wjcc2017 As well, selected games will be streamed live on the World Curling Federation’s Youtube channel, www.youtube.com/WorldCurlingTV