Streifel steals her way to semifinal at World Juniors

Canada’s Kristen Streifel stole her way to a 7-5 win over South Korea’s Min Ji Kim in the women’s Page 3 vs 4 playoff, earning a trip to the semifinal, while Tyler Tardi will finish out of playoff contention after losing 8-7 in a tie-breaker to Norway at the 2017 World Junior Curling Championship in Gangneung, South Korea today. 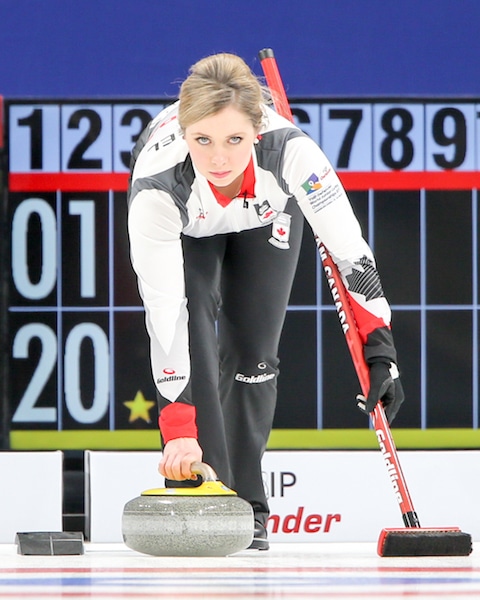 Kristen Streifel keeps her eyes on the target as she prepares to throw her rock at the 2017 World Junior Curling Championships in Gangneung, South Korea (WCF/Richard Gray photo)

“That felt really great,” said Streifel, who is backed by vice-skip Chantele Broderson, second Kate Goodhelpsen, lead Brenna Bilassy, alternate Karlee Burgess and coach Amanda Dawn St. Laurent. “I think our team really came together in that game and we came out here with a fresh mindset and that really worked well for us. We’ve talked all season long about peaking at the right time, and we struggled a little bit in the round-robin but I think we’re coming together as a unit.” Streifel missed her final shot in the sixth – a double take-out – to give up three points, but the Canadians battled back to score their deuce in seven, and then stole the next two ends to take a 7-4 lead after eight. “I think we just were really putting the pressure on them,” she said. “I think both teams were making the shots but we just capitalised on them a little bit more later in the ends. She (Kim) had to make some big run-backs and just missed them by a little bit, so it worked in our favour.” In the men’s tie-breaker, Tardi and his B.C. team from Langley/New Westminster (vice-skip Sterling Middleton, second Jordan Tardi, lead Nick Meister, alternate Nicholas Rabl, coach Paul Tardi) had their hands full against Norway’s Magnus Ramsfjell. Tied 7-7 after nine ends, Canada couldn’t keep enough rocks in play to force the steal, leaving Ramsfjell an open hit for the single and the win. 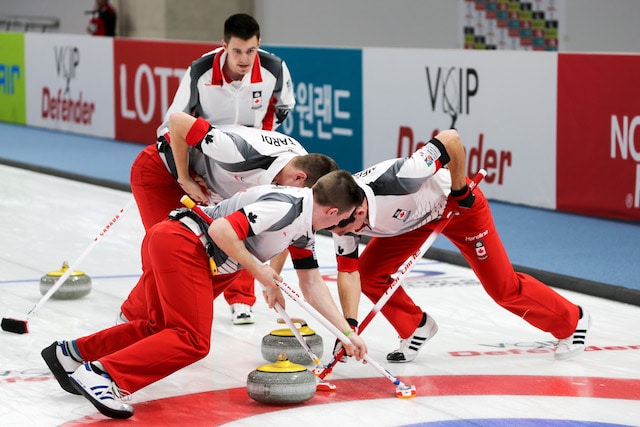 Team Canada skip calls to his teammates Sterling Middleton, Jordan Tardi and Nicholas Meister as they try to sweep a rock into the rings during the men’s tie-breaker at the 2017 World Junior Curling Championships in Gangneung, South Korea (WCF/Richard Gray photo)

“I’m disappointed obviously, but they played great,” said Tardi as his run at the World Junior title came to an end. “It’s tough to beat a team that’s playing that good but…best of luck to them. Even though we lost and it sucks, I think we’re still ready to come back next year. We’ll have to reflect on what we’ve learned.” “I thought my team played well and I’m proud of them but unfortunately, that’s just how it is sometimes,” he said. Streifel and her team will face Scotland’s Sophie Jackson in the semifinal on Saturday (Friday 7 pm. EST). Jackson lost the Page 1 vs 2 playoff to Sweden’s Isabella Wranaa, 9-6. “Yes, we’re thinking about the semifinal now,” she said. “We’re really happy with how we played today so we want to carry it out through tomorrow, but again, tomorrow’s a fresh day and we’re just going to come out there and give it our all.” The semifinal will be broadcast Friday at 7 p.m. EST on the World Curling Federation’s Youtube channel, www.youtube.com/WorldCurlingTV.