ST. JOHN’S — A pair of Maritime teams fighting for entry into the main draw of the 2017 Tim Hortons Brier rolled to easy victories Thursday in the opening pre-qualification draw. 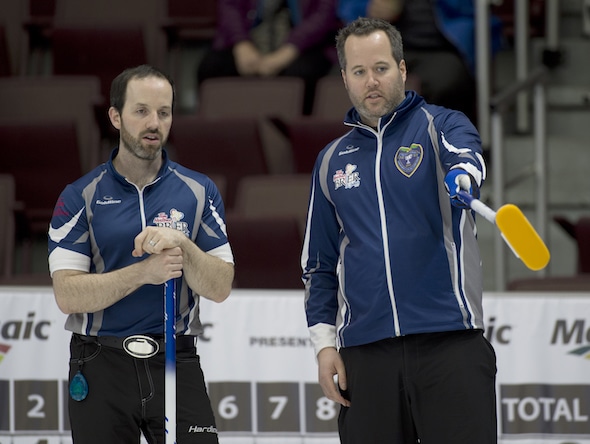 Eddie MacKenzie of Prince Edward Island and Jamie Murphy of Nova Scotia never gave their northern opponents a chance to get untracked as they scored lop-sided wins. MacKenzie’s Charlottetown team beat Jim Nix of Nunavut (Iqaluit) 11-4 while Murphy (Halifax) defeated Craig Kochan of Yukon (Whitehorse) 8-2. “It’s always good to win a game, but the main purpose was to get a hold of the ice, which we did pretty early,” Murphy said after the win. “So all in all a pretty good game. “We probably didn’t get to play as many soft shots as we would have liked to, which we know we’re going to need to make coming down the stretch. But there’s a couple of games left to figure that out, too.” The four teams are in the pre-qualifying because Yukon, Nova Scotia and Nunavut failed to get out of the round last year and Prince Edward Island finished last in round-robin play last year in Ottawa. The teams play a single round-robin with the teams with the two best records advancing to the play-in game on Saturday. MacKenzie, third Sean Ledgerwood, second Matthew Nabuurs, lead Robbie Doherty, alternate Phil Gorveatt and coach Al Ledgerwood opened with a deuce and then stole one in the second when Nix was inches short of executing a successful hit and roll with his final stone. But Nix made the draw around a host of guards and a crowded house to score a single in three. The Nunavut skip wrecked on a guard with his last-rock double kill attempt in the fourth. That left MacKenzie an easy draw to the four foot for three and a commanding 6-1 margin. Nix rubbed a guard while trying to sneak through a port with his last rock in five. That gave P.E.I. a steal of four to put the game away with a 10-1 lead. Nix and his team made some good shots in the sixth and seventh ends to count a single and a steal of two but shook hands after giving up one in the eighth.

One sheet over, Murphy, third Jordan Pinder, second Scott Saccary, lead Phil Crowell, alternate Alan Darragh and coach Bruce Lohnes rolled steadily to their victory. The Nova Scotia crew opened with two in the first, stole singles in the next three ends and a deuce in five for a 7-0 lead. They gave up singles in the sixth and seventh but Yukon also shook hands after eight. “Nice to get a win and a feel for the ice, which is a little different from what we’re used to,” said MacKenzie. “It’s a little quick.” His team kept a lot of rocks in play in almost every end, giving them the opportunity to try different shots. “It’s nice to get rocks in play to get used to making some shots. We like to get used to having to make draws.” Yukon will play P.E.I. while Nova Scotia tangles with Nunavut in the second preliminary draw Friday at 8 a.m. If a tiebreaker is necessary, it will be Saturday at 9 a.m. NST The main round-robin play begins Saturday with draws scheduled for 3 and 8 p.m. (all times NST). For ticket and other event information, https://www.curling.ca/2017brier/ For the complete schedule, go to https://www.curling.ca/2017brier/draw/ This story will be posted in French as soon as possible at https://www.curling.ca/2017brier/?lang=fr TSN (RDS2 in French), the exclusive television network for Curling Canada’s Season of Champions, will provide complete coverage of the 2017 Tim Hortons Brier.