ST. JOHN’S — Jamie Murphy’s Halifax team has put itself in strong position to nail down the 12th and final berth in the main round robin at the 2017 Tim Hortons Brier. 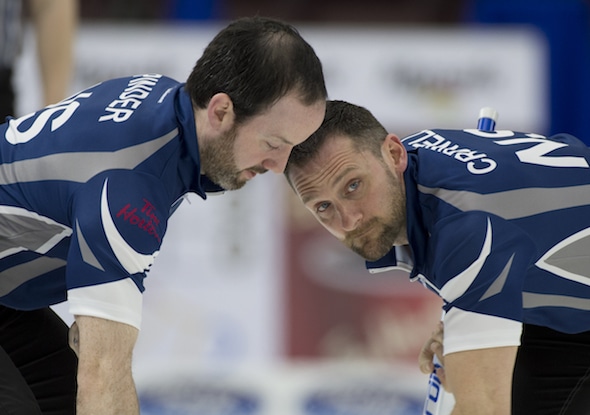 Nova Scotia improved to 2-0 in the pre-qualifying round Friday morning at Mile One Centre with an emphatic 17-4 win over Nunavut’s Jim Nix (0-2; Iqaluit).

With the victory, Murphy, vice-skip Jordan Pinder, second Scott Saccary, lead Phil Crowell, alternate Alan Darragh and coach Bruce Lohnes have all but nailed down a spot in Saturday’s pre-qualifying final at 3 p.m. (all times NST), concurrent with the opening round-robin draw of the Tim Hortons Brier.

A Nova Scotia victory later Friday at 4 p.m. against P.E.I.’s Eddie MacKenzie (1-1; Charlottetown) would seal the deal, but if P.E.I. wins, and the Yukon’s Craig Kochan (1-1; Whitehorse) beats Nunavut Friday afternoon, there would be a three-way tie for the two spots in the pre-qualifying final, necessitating a 9 a.m. tiebreaker on Saturday, with the pre-game last-shot draw distances deciding the positioning.

Murphy, though, has been through the process before; he lost the pre-qualifying final last year in Ottawa to Jamie Koe of the Northwest Territories.

“We’re banking on a little bit of that experience from last year, and we feel pretty good going into it,” said Murphy. “We know it’s a kind of a cage match environment. Winner take all, right? Hopefully we can keep coming out firing.”

Yukon kept its hopes alive on Friday morning with a grinding 12-7 win over P.E.I. Kochan, backed up by Jon Solberg (throws fourth rocks), vice-skip Ray Mikkelsen (throws second rocks), lead Darrin Fredrickson, alternate Wade Scoffin and coach Larry Snow, went down 6-3 by giving up four in the fifth end, but bounced back with two in the sixth and a go-ahead stolen three in the seventh and never looked back.

“It was large,” said Kochan. “We knew coming out that if we won one of the first two, we still had a good chance. Now, I think the hardest part will keeping our focus to play Nunavut.”

The Tim Hortons Brier pre-event festivities continue on Friday with the first round of the 23rd annual Ford Hot Shots competition at 1:50 p.m.