ST. JOHN’S – Jamie Murphy of Nova Scotia will meet Craig Kochan of Yukon Saturday morning with the winner advancing into the main draw of the Tim Hortons Brier. 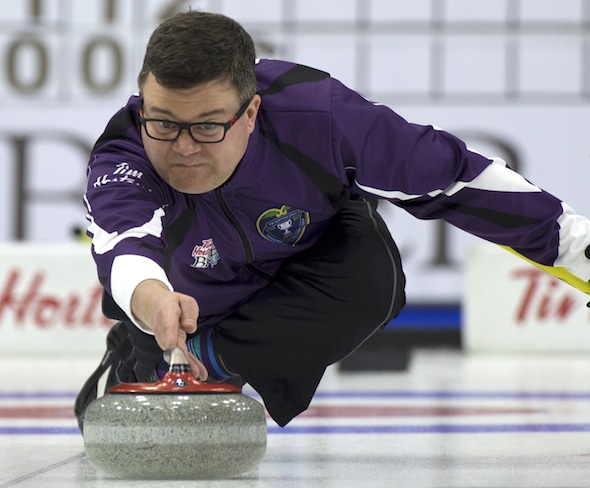 Yukon skip Craig Kochan has his eyes on a berth into the main draw of the 2017 Tim Hortons Brier. (Photo, Curling Canada/Michael Burns)

The two skips led their teams to convincing victories in the third and final draw of the pre-qualifying round Friday. Murphy rolled past Eddie MacKenzie of Prince Edward Island and Kochan beat winless Jim Nix of Nunavut by identical 10-1 scores.

MacKenzie’s Charlottetown team finished 1-2 and Nix, of Iqaluit, was winless at 0-3.

“It seems the first-day jitters are gone,” Kochan said after his team’s second win of the day. “It was a really good performance by everyone today.”

The 37-year-old who throws third rocks, said his team has figured out the ice at Mile One Centre.

“We’ve got a handle on the ice now and the guys are comfortable, not as intimidated by the surroundings, so I’m expecting it to be a good game,” he said of the rematch with Nova Scotia, which won their first meeting 8-2.

“We have a game plan we will use against them. Not one that says we have to be up three or four just to be safe. As long as we play well then I don’t think we have to do anything special.”

Murphy is hoping to get Nova Scotia back into the main draw of the Tim Hortons Brier after losing in the pre-qualifying final last year to Jamie Koe of the Northwest Territories. And the Nova Scotia skip in the 2012 and 2014 Tim Hortons Briers is also looking for another quick start.

“We’re starting quick and that’s what we’re looking for, good aggressive starts and it’s paid off,” he said, adding the ice was “perfect to play on and everyone threw well.”

Nova Scotia scored a single in the first end and then stole two in the second, one in the third and three in the fourth to roll past their Maritime neighbours. P.E.I. didn’t get on the scoreboard until the seventh and shook hands after giving up a deuce in the eighth.

Nix and his Nunavut team also shook after the eighth when they surrendered a steal of three. It was the fourth end Yukon has stolen points After scoring one in the second, Kochan’s crew, which had rallied from a 6-3 deficit to beat P.E.I. 12-7 in the second draw, stole a single in three, two in the fourth and two more in the seventh.

The winner of the pre-qualifying final gets to play Glenn Howard of Ontario in the second draw of the main round-robin Saturday at 8 p.m. NST. The opening draw goes at 3 p.m.

For ticket and other event information, https://www.curling.ca/2017brier/

For the complete schedule, go to https://www.curling.ca/2017brier/draw/

This story will be posted in French as soon as possible at https://www.curling.ca/2017brier/?lang=fr