ST. JOHN’S — Mike McEwen left the ice early Sunday afternoon at Mile One Centre, fairly certain he was not exactly the most popular man in St. John’s. 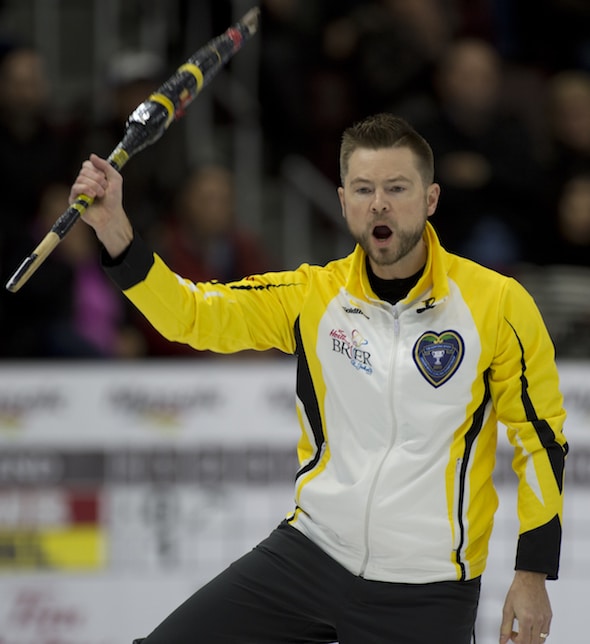 Perhaps McEwen might consider keeping a low profile on Sunday?

Jokes aside, the pro-Newfoundland/Labrador crowd also appreciated the Manitobans’ efforts on Sunday, as McEwen was in fine form, never more so than in the eighth end when he made a precision tick-bang to score a game-clinching three and put the game out of reach.

The turning point came earlier, though when Gushue was just heavy with a draw in the sixth end, giving Manitoba a steal of one to take a 4-2 lead — a crushing blow at that stage in the game involving two high-quality teams.

“It was a story of two halves; they were shooting really well and we managed to make some great shots to keep the game tight and trade the lead back and forth,” said McEwen. “We had some really good moments after the break. It was a tight game that obviously doesn’t look that way on the scoreboard.”

After Newfoundland/Labrador’s emotional and raise-the-roof loud win over Alberta in Saturday afternoon’s opening draw, McEwen had a good idea of what his team was in for Sunday morning, and didn’t mind the prospect.

“I thought it was a good thing (to play them Sunday morning),” he said. “We were able to get a game in under our belts yesterday, feel what the building was going to be like and we had a good idea going into this morning what we were going to have to do. We were able to keep the crowd a little quieter; it got noisy in the first half but we quieted ’em down in the second half. We liked how the first two games lined up for us.”

Newfoundland/Labrador dropped to 1-1 with the loss, and will be back on the ice later Sunday against New Brunswick’s Mike Kennedy (1-0; Fredericton).

“Just shake it off,” shrugged Gushue. “You’re probably not going to go through this undefeated, and Mike is going to beat a lot of teams. We’ll regroup. It’s not a big deal; certainly disappointing, but we’ll rebound from this.”

In other Sunday morning action, Ontario’s Glenn Howard (1-1; Etobicoke) hit the win column with a 5-3 win over B.C.’s John Morris (0-2; Vernon/Kelowna) with a steal of one in the fourth end being the turning point; and Saskatchewan’s Adam Casey (1-1; Regina) took an early 4-0 lead through two ends and sailed home with an 11-5 win over Alberta’s Brendan Bottcher (0-2; Edmonton).

Action at the 2017 Tim Hortons Brier continues on Sunday, with draws scheduled for 3 p.m. and 8 p.m. (all times NST).