Canada joins a logjam of teams fighting for position at the 2017 World Wheelchair Curling Championship in Gangneung, South Korea, after losing both games on Tuesday. 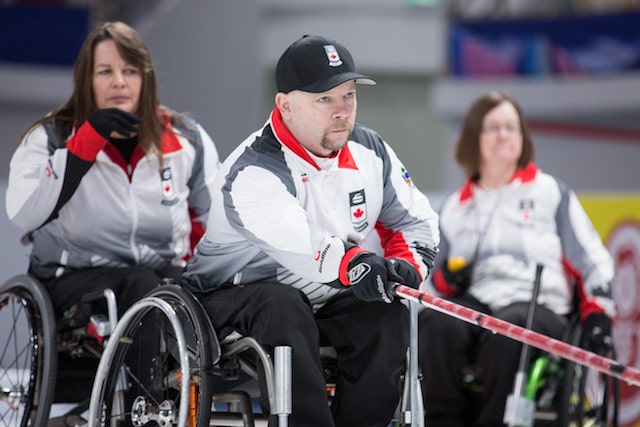 Skip Jim Armstrong, vice-skip Ina Forrest, second Marie Wright, lead Mark Ideson, alternate Ellis Tull and coach Wayne Kiel now have three losses and join China, Germany, South Korea, Norway and Scotland in a group with 3-3 records. But despite the losses, it was also a day of preparation. Looking ahead to the 2018 Paralympics, which will take place in this same venue, Team Canada shifted its line-up around so that all members of the team can earn some valuable experience at this highest level of competition. In a 6-2 loss to China’s Haitoa Wang, Ideson took over skipping duties for Armstrong, with Forrest throwing last rocks and Tull at lead. The game hinged on a couple of missed shots late in the sixth and seventh ends, allowing China to steal their way to victory. With the original line-up back in place against South Korea’s Jong Pan Kim, Team Canada struggled early, giving up three steals in a row to trail 6-0 at the break. They fought back in the second half with a deuce in five, followed by steals in the next two ends, but ended up on the short side of an 8-4 score. The round robin continues on Wednesday with Team Canada playing only one game, against Finland’s Markku Karjalainen (Tuesday 8 p.m. EST). For more information about the 2017 World Wheelchair Curling Championship, go to: www.worldcurling.org/wwhcc2017