ST. JOHN’S — Depending on whom you ask, Jean-Michel Ménard’s Quebec team is not one you’d want to be playing right about now at the 2017 Tim Hortons Brier. 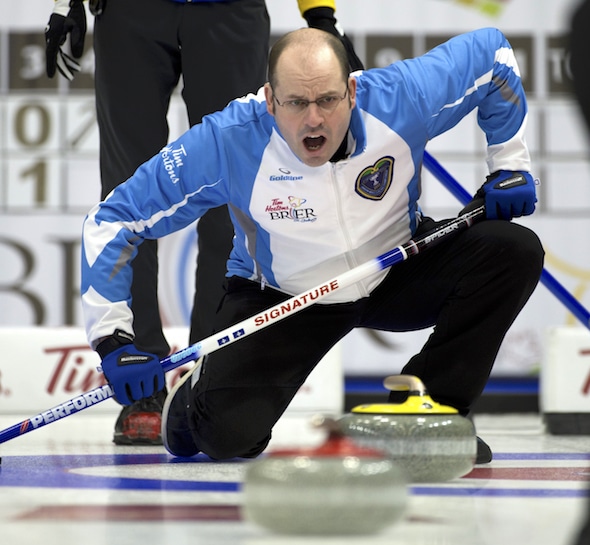 Ménard, himself, had a cagy answer to the question when asked Wednesday at Mile One Centre, moments after an 8-5 win over Alberta’s Brendan Bottcher (3-5; Edmonton) that ran his Lévis team’s win streak to five straight.

“Well,” said a smiling Menard, “you would have to ask the other teams.”

Then, the question was directed specifically at Ménard: would HE want to be playing Quebec? This time, there was no doubt in his voice:

“No,” replied Ménard, whose team is rounded out by vice-skip Martin Crête, second Éric Sylvain, lead Philippe Ménard, alternate Pierre Charette and coach Robert Ménard. “We’re playing well enough, and we’re getting lots of breaks, which makes it very useful for us. And we’re pretty calm on the ice. Strategy-wise, we’re running a good game to manage the scoreboard, making sure that as much as possible we have the hammer in the even ends. And things are working well for us right now; the momentum is building.”

That momentum was on display Wednesday morning as Quebec broke open a tight game by scoring three in both the sixth and ninth end to hand Alberta it a potentially fatal fifth loss in eight outings.

Quebec, meanwhile, has charged into the thick of the playoff race after an 0-2 start to the Tim Hortons Brier.

“But even after our first two games, we weren’t too discouraged,” insisted Ménard. “We felt we played well enough, especially in our second game against (Northern Ontario’s Brad) Jacobs. It was just a matter of winning a game, and the first win against Nova Scotia gave us confidence, and things have been snowballing from there. When that happens you try to take advantage of it as much as possible. Sometimes you’re on the other side of the coin, like we were last year in Ottawa (where Quebec missed the playoffs with a 4-7 record). We weren’t playing that bad, but we just couldn’t get anything going. This year, for now, it seems to be the other way around. So I’ll keep quiet and continue doing the stuff we’re doing right now.”

In other morning-draw play on Wednesday, Northern Ontario (6-2; Sault Ste. Marie) bounced back from its loss Tuesday night against Newfoundland/Labrador’s Brad Gushue with a 6-5 win over New Brunswick’s Mike Kennedy (1-6; Fredericton). The win left Northern Ontario alone in first place in the round-robin standings.

Also, B.C.’s John Morris (5-3; Vernon/Kelowna) stole three in the fourth end and cruised to a 9-1 win over Jamie Koe of the Northwest Territories (1-6; Yellowknife); and Saskatchewan’s Adam Casey (5-3; Regina) drew for a game-winning single in the 10th end for an 8-7 triumph over Nova Scotia’s Jamie Murphy (2-5; Halifax).

Action at the 2017 Tim Hortons Brier continues on Wednesday, with draws scheduled for 3 p.m. and 8 p.m. (all times NST).