Kate Barratt of Gibsons, B.C., learned to curl in her 50s, and since then she has been giving back to the sport she loves. Her contribution to curling in Gibsons was recognized on the weekend as she stood on the ice at Mile One Stadium in St. John’s during a break in the bronze medal game of the 2017 Tim Hortons Brier to receive the 2017 Curling Canada Volunteer of the Year Award. 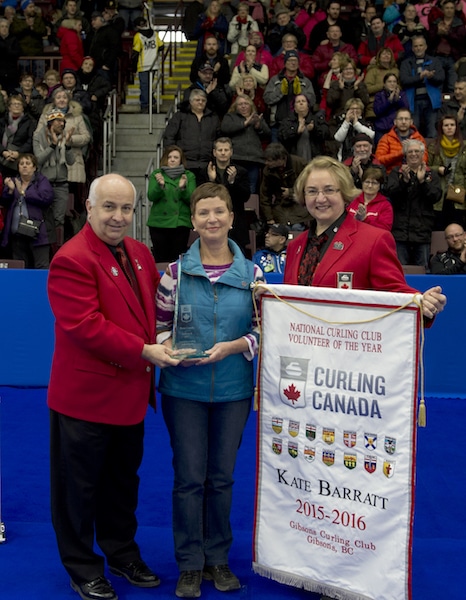 Curling Canada Volunteer of the Year Award winner Kate Barratt, of Gibsons, B.C., stands with Curling Canada Board of Governor’s Chair Peter Inch and Governor Lina West to receive her award during a break in the bronze medal game of the 2017 Tim Hortons Brier at Mile One Stadium in St. John’s, N.L. (Curling Canada/Michael Burns photo)

The annual volunteer award is based on the nominee’s contributions from the previous curling season, in any number of areas, and for Barratt, that covers a lot of territory, including making sure her fellow curlers on the Sunshine Coast had a dependable ice surface on which to play. When her club’s 40-year-old ice plant was on its last legs, Barratt immediately went to work to secure funding for a replacement. She applied for grants and donations of all kinds, and in the end, her single-minded tenacity would end up producing a remarkable $140,000 of the $160,000 total cost of the project. At the same time, she took a lead role in establishing a selection committee to determine the contractor for the project, while getting volunteers together to work on a facelift of the club to coincide with its 40th anniversary celebrations. As if that weren’t enough, she did her usual volunteer work for the Gibsons Curling Club, including producing a club newsletter, keeping the club website updated, developing an online registration system, helping to organize leagues, organizing curling clinics for members and maintaining an annual five per cent growth rate in membership. That’s a lot of work for one person, but Barratt says she’s the one who has benefited the most from her curling life. “I love the game! I love sliding out of the hack and hearing that rumbling sound as the rock moves down the ice,” she says. “I also love the fact that even when I am throwing badly, I can contribute to the team with my sweeping.” And the off-ice benefits are just as meaningful to her, Barratt insists. “Being on the Board of a small town club that is trying to, not only survive, but to grow at a time when most clubs are shrinking, has made me work hard to try to find ways to help the club. I have learned so much about curling and ice and working with the members, all of which has helped me to grow as a person,” she says. In her nomination letter to Curling Canada, Tammy Hartman, secretary of the Gibsons Curling Club, highlighted another of Barratt’s unique contributions to the sport and community: Barratt’s efforts to make curling inclusive of those with special needs. “Last year (Barratt) initiated a Stick Curling League so members who could no longer sweep could still be active club members,” says Hartman. “She has fostered strong relations with the Special Olympics organization to help them feel more connected and have better access to information and opportunities to participate in bonspiels.” “Kate is the face of the Gibsons Curling Club,” adds Hartman. “When she takes on a role, she gives 110 per cent to every aspect.” The other National Finalists for this annual volunteer award were Darlene Danyliw (Saskatchewan), Keith Stoesz (Manitoba), Ron Watt (Ontario), Cathy MacCallum (Quebec), Andrew Paris (Nova Scotia) and Shirley Kelly (Newfoundland and Labrador). Curling Canada also recently announced two other recipients of annual awards. Bernadette McIntyre of Regina has received the Award of Achievement, which recognizes individuals who have contributed significantly to curling in one of four areas: builder, technical development (instructor, coach, official, ice technician), marketing and media. McIntyre’s name is synonymous with curling in her home province of Saskatchewan, as she has put in countless hours in all aspects of the sport. She has served volunteer time on boards ranging from her home club, to the Saskatchewan Curling Association (now known as CurlSask) and Curling Canada, for whom she served a five-year stint as a member of the Board of Governors. Kathy Siddall, of Kentville, N.S., is the 2017 recipient of the Ray Kingsmith Award, named after the man who played a leading role in bringing curling to the Winter Olympic family, and was a tireless volunteer in administration and management roles in the sport of curling. The award honours individuals who best demonstrate a similar commitment and dedication to our sport that made Ray Kingsmith the consummate sport executive. Siddall’s past experience working with events, as well as being a regional director with the Nova Scotia Curling Association, makes her an obvious selection for the Ray Kingsmith Award. She has played a lead role in making Nova Scotia curling centres more prominent within their respective communities, and has stressed the importance of communication between those curling centres to share successful strategies. Siddall has also served numerous volunteer roles at her home clubs — currently the Glooscap Curling Club in Kentville, and prior to that the Halifax Curling Club. And, over the years she’s handled countless different positions with organizing committees for international, national and provincial championships in Nova Scotia, including, most recently, the 2017 Canadian Mixed Championship in Yarmouth, 2016 Canadian Masters Championships in Kings County, the 2016 Everest Canadian Seniors in Digby and the 2015 Ford Word Men’s Championship in Halifax. The Curling Canada Volunteer of the Year Award was presented to Barratt during an on-ice ceremony during the bronze medal game of the 2017 Tim Hortons Brier at Mile One Stadium in St. John’s, N.L., and she couldn’t have been more thrilled. “The ice plant project was the biggest project that I have ever been in charge of as a volunteer and I had to learn so much in order to bring it to completion,” she says. “Being nominated by my peers on the Board and reading the beautiful reference letters written by members of Gibsons Curling Club was so special for me. Every time I walk into the club and receive a hug of congratulations from a curler, I feel so happy and grateful that they put their faith in me and that they celebrate the award along with me. This award and trip to Newfoundland is the most exciting thing that has ever happened to me.”