The 2017 Everest Canadian Seniors kicks off in Fredericton

Alberta’s Wade White credits a “pistol shot” in the last end for a come-from-behind win over Manitoba on his first foray onto the ice at the 2017 Everest Men’s and Women’s Curling Championship underway in Fredericton, N.B. 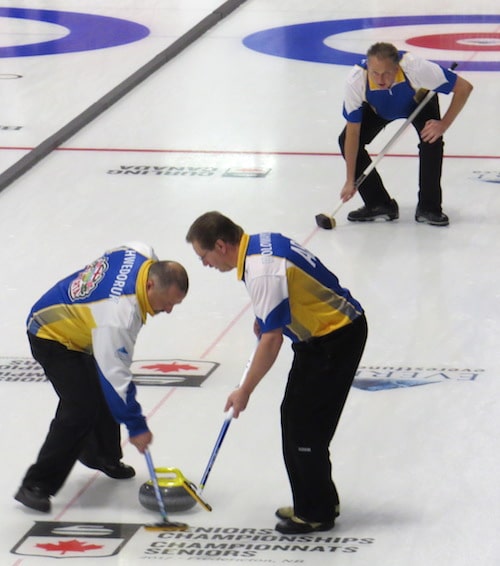 “It was a tough game right from the first and I knew nothing was going to be easy,” said White, skip of the Saville Community Sports Centre foursome. “There’s lots of experience on that team; I couldn’t put anything past them.” A five-ender in the eighth saw the teams shake hands on a 10-6 Alberta win. Alberta was one of three men’s teams to notch two wins on the first day of the round robin at the championships taking place at both the Willie O’Ree Place and the Capital Winter Club in Fredericton. After four draws, New Brunswick’s Terry Odishaw and Ontario’s Howard Rajala join White at the top of the men’s standings. Odishaw started off with a close 4-3 win over Saskatchewan’s Darrell McKee in the opening draw and followed that with a 10-1 win over Northwest Territories’ Mel Sittichinli. Rajala scored his wins over Newfoundland and Labrador’s Mark Noseworthy and Yukon’s Craig Kochan. In Women’s round robin action, Nova Scotia’s Mary Mattatall steered her team to a 10-2 win over New Brunswick’s Kathy Hicks in the opening draw. She, like most of the players at this event, had praise for both the quality of the ice and for the overall organization of the event. “This is our kind of ice so we’re happy for that,” she said. “When you hit the broom, it does what you think it’s going to. It’s good to have the first win under our belt. It’s a good start.” Mattatall followed that up with a 10-1 win over Yukon’s Darlene Gammel on Monday evening to join Saskatchewan’s Sherry Anderson, Manitoba’s Terry Ursel and Northern Ontario’s Peggy Taylor at the top of the standings, all with 2-0 records. Round robin action continues on Tuesday with four draws, both Men’s and Women’s games, divided between the two arenas. Draw results for the 2017 Canadian Seniors will be available at www.curling.ca. For event information, visit https://www.curling.ca/2017seniors.

Teams gather on the ice at Willie O’Ree Place for the opening ceremonies of the 2017 Everest Canadian Seniors Curling Championships in Fredericton, N.B. (Curling Canada photo)