Sweden set for showdown with Canada

EDMONTON – The stage is set for an early round showdown of the top guns at the 2017 Ford World Men’s Curling Championship, presented by Service Experts. 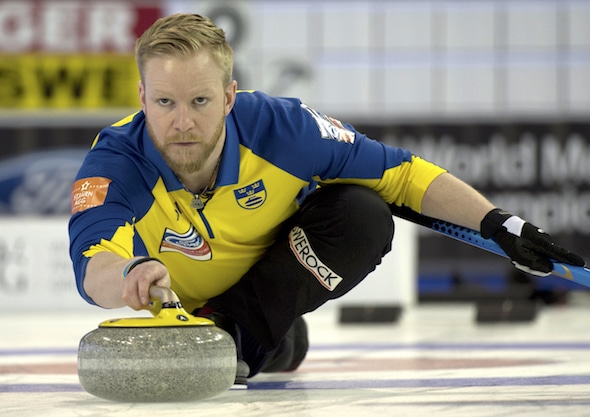 Pre-event favourites Niklas Edin of Sweden and Brad Gushue of Canada will face off this evening (7 p.m., all times MT) in a battle of teams at 2-0. Edin joined Canada and Japan at that mark with a seven-end 8-2 victory over Alexander Baumann of Germany (1-2) during Draw 4 Sunday afternoon at Northlands Coliseum Although Edin had a slip-up in the second end to allow the Germans to steal a point, he was in control all the way. In the fourth, Baumann allowed Edin to steal three when his final shot came up short. Edin sealed the deal with a three-ender in the seventh and Baumann’s Bavarian bunch broke out the handshakes to concede victory to the Swedes.

The game was similar to the night before in which Sweden subdued China’s Rui Liu 10-7 in a game that went the distance after Edin jumped out to a 6-1 lead. Saturday’s draws were an adventure for all the teams due to changing ice conditions. “Better now,” said Edin of the ice and the way the Swedes were playing. “We were more focused on the ice and trying to figure out the ice from the start. We played really well. I made a bad mistake there on the takeout for two that I overcurled and then they steal in the second, a  miss that normally I can’t afford to do. But we played well.” Edin believes the ice should be more predictable the rest of the week. “The rain yesterday afternoon didn’t help either, and then the rocks just being sanded pretty recently, it just curled a lot, and then with the frost it was just hard to predict the amount of curl and the speed. It’s probably going to be a bit easier and even better tonight,” said Edin. Ah yes, tonight. That would be Edin going up against Gushue, who cruised through a 9-2 win in six ends over Russia’s Alexey Stukalskiy Sunday morning. Edin doesn’t have any fancy game plan for the Gushue gang. “Play well. That’s the key,” said Edin, who is supported by third Oskar Eriksson, second Rasmus Wranå, lead Christoffer Sundgren, alternate Henrik Leek and coach Fredrik Lindberg. “I don’t think strategy matters all that much, it’s shotmaking. If you play 85 per cent or more you’ll have a chance to win no matter  what the tactics are. And if you play less than 80 you’re won’t win no matter how you play the ends. It’s all about shotmaking, and obviously you can’t miss the last ones.” In other action, Scotland’s David Murdoch, making his seventh appearance at the Ford Worlds but first since 2013, scored five in the eighth end to beat John Shuster of the United States 9-4. Murdoch evened his record at 1-1 while the U.S. fell to 1-2. “We just felt a little more comfortable out there on draws and freezes, and we played a more aggressive game,” said Murdoch, who had a draw for five after Shuster shaved a takeout, leaving Scotland sitting four. “We got a miss from the opposition’s third (Tyler George) and that just opened it up.

“We’ll take it. We felt in control the whole game. It was great to get a win on the board. You never like to get behind (in the standings) and we still have a game tonight against Japan (2-0) and get a win to finish strong.” Switzerland, skipped by Peter de Cruz, moved to 2-1 with a 6-3 victory over Steffen Walstad of Norway, who dropped to 1-1. Italy’s Joel Retornaz is 2-1 after downing China 8-3. The Chinese are winless in two games. Canada, Japan, Russia (0-2) and Jaap van Dorp of the Netherlands (0-2) had Draw 4 off. The Ford Worlds continue Sunday with a draw at 7 p.m., and Monday at 9 a.m., 2 p.m., and 7 p.m. For ticket and other event information, visit httphttps://www.curling.ca/2017worldmen/ This story will be posted in French as soon as possible at https://www.curling.ca/2017worldmen/?lang=fr TSN (RDS2 in French), the exclusive television network for Curling Canada’s Season of Champions, will provide complete coverage of the 2017 Ford Worlds.