EDMONTON – Marcel Rocque knows all about the Mighty Maple Leaf. He’s a three-time world champion for Edmonton skip Randy Ferbey back in the day. So he knows the mystique of the Maple Leaf doesn’t need any help, but that’s just what his Chinese charges did Tuesday afternoon. 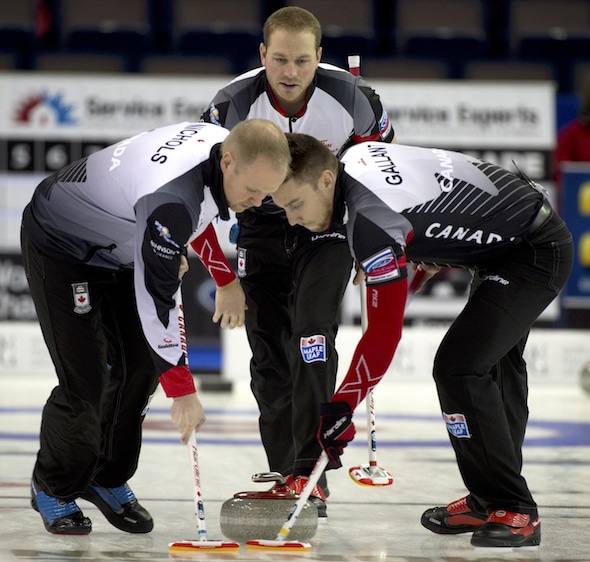 China had started strong, scoring two in the first end and playing it tight for the first four ends. But in the fifth, a missed double takeout by Chinese skip Rui Liu allowed Gushue a free draw for three to go ahead 6-3. “Unfortunately for us that three-ender broke our back. They made a mistake and you’ve got to capitalize because you don’t get many and then we turned around and made two mistakes and caused that three,” said Rocque, who was honoured before the draw along with Ferbey, vice-skip David Nedohin and second Scott Pfeifer for winning the 2005 Brier at Northlands Coliseum. “That three with all those mistakes, you can’t do that. They’re the Mighty Maple Leaf for a reason. You swim with the big fish in the big pond, we can’t make those mistakes.” For Gushue, third Mark Nichols, second Brett Gallant, lead Geoff Walker, alternate Tom Sallows, team coach Jules Owchar and national coach Rick Lang, it was about taking care of business. “The key really is just to stay focused because often when you get up three or four you give up an easy deuce or three and they’re right back in the game,” said Gushue. “As funny as it sounds, it’s a little bit mentally taxing. You’ve just got to force yourself to do a little bit better job. We’ve been doing a better job, we haven’t let anybody back into a game at any point which is great, and certainly getting a couple of ends rest when you have back-to-back (games) is very valuable.” The Canadians have many of their expected tough matches behind them. Gushue believes that will help them heading into the playoffs. “For us, because we came in here a little physically tired and mentally tired I think getting through that stretch in the fashion that we did and now if we can continue on the way and maybe have a couple of more games like this, it will actually allow us to rest a little bit or not fatigue any more. We can go into the weekend strong and give it that little bit extra for sure,” said Gushue. “I don’t anticipate any issues bringing up the intensity and focus for those games.” In other Draw 10 play, Sweden skipped by Niklas Edin, kept pace with Canada by downing Russia 10-5 to improve to 6-1. Russia, led by new skip Alexey Timofeev, is winless in six games.

Elsewhere, Japan’s Yusuke Morozumi scored four in the eighth end en route to a 9-7 victory over Norway’s Steffen Walstad and into fourth place in the standings at 4-2. Norway is 3-4 along with Scotland’s David Murdoch, who beat the Netherlands 9-5. Dutch skip Jaap van Dorp is 0-6. Teams with byes on Draw 10 were Germany (Alexander Baumann, 2-4), Italy (Joel Retornaz, 3-3), United States (John Shuster, 3-3), and Switzerland (Peter de Cruz, 5-1) The Ford Worlds continue Tuesday with a draw at  7 p.m. (MT). and Wednesday with draws at 9 a.m., 2 p.m., and 7 p.m. For ticket and other event information, visit httphttps://www.curling.ca/2017worldmen/ This story will be posted in French as soon as possible at https://www.curling.ca/2017worldmen/?lang=fr TSN (RDS2 in French), the exclusive television network for Curling Canada’s Season of Champions, will provide complete coverage of the 2017 Ford Worlds.