Team Canada is showing no signs of slowing down at the 2017 Ford World Men’s Curling Championship, presented by Service Experts. 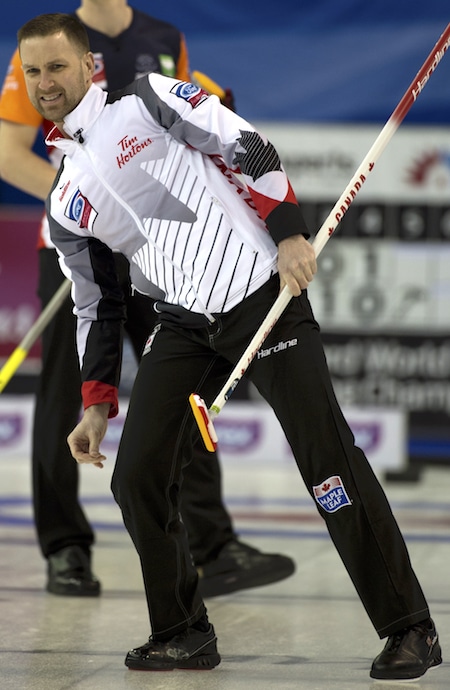 Brad Gushue’s team has yet to lose a game at the 2017 Ford Worlds. (Photo, Curling Canada/Michael Burns)

A first-end open hit for three from Gushue got the Canadians off to a flying start, and they would roll on to an 8-3 triumph over winless Jaap van Dorp of the Netherlands (0-8).

But, suggested Gushue, the level of play for Team Canada against the Dutch was not where it needs to be.

“I think at the end, we lost a little bit of focus, but the first couple ends, I thought we were really sharp,” said Gushue, whose raise-double in the fifth end set the stage for a draw for two that made it 6-1 at the break. “We want to make every shot, and I think that’s one thing we’re going to stress a little bit after this game is that I thought we lost that a little bit in the last couple ends of that game. And that’s what can happen when you get into some lopsided games: you lose focus, and then it’s hard to get it back. On each shot, I think we need to be fully engaged and try to make it as good as we can. If continue to do that, then I don’t see any letdown happening this weekend.”

The Canadians can wrap up not only a playoff berth, but also a spot in Friday night’s Page 1-2 playoff game (7 p.m., all times MDT), with a victory on Wednesday afternoon at 2 p.m. against Japan’s Yusuke Morozumi (5-3), who’s also coming off a big win: 12-4 over Russia’s Alexey Timofeev (0-8).

With the Japanese in the playoff hunt, it’s a game that Gushue is looking forward to.

“We’ve played Morozumi in the past, they’re a good team and they can certainly play a good game against us,” said Gushue, who has split a pair of games with the Japanese team. “We’ll have to be sharp, and we probably can’t get away with the mistakes we made in that game.”

In the wake of Rachel Homan’s gold medal at the CPT World Women’s Championship, presented by Ford of Canada, in Beijing, Gushue’s men’s team is seeking a sweep of the world men’s and women’s titles for the first time since 2008 when Jennifer Jones and Kevin Martin both took gold.

It would be the 12th time that Canada has won men’s and women’s titles in the same year. 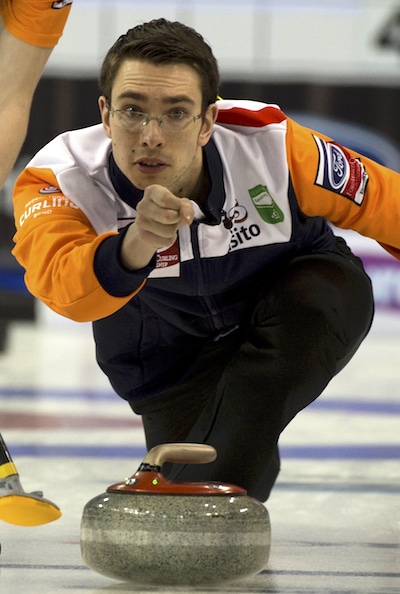 Gushue, for the record, refuses to get caught up in talk of an unbeaten run: “As long as we win Sunday night,” has become his stock answer to all inquiries on the topic.

Also, cautioned Owchar, there’s still plenty of work to do before then, and there’s room for a letdown.

“You ease off a little, it’s tough to turn the switch back on sometimes,” he said. “The boys are throwing well right now; we have to keep ’em doing that.”

In other Wednesday morning games, Sweden’s Niklas Edin (7-1) kept pace with the Canadians with a 6-4 win over Scotland’s David Murdoch (3-5); and China’s Rui Liu (4-4) stayed in playoff contention with a 7-6 extra-end win over Norway’s Steffen Walstad (3-5).

The Ford Worlds continue on Wednesday with draws at 2 p.m. and 7 p.m.