EDMONTON – An American uprising just might be in the works; at least John Shuster thinks so. The United States skip and his team from Duluth, Minn., has cobbled together a six-game win streak to close out the round robin. In doing so the team served notice it will be a force in the playoffs of the 2017 Ford World Men’s Curling Championship, presented by Service Experts. 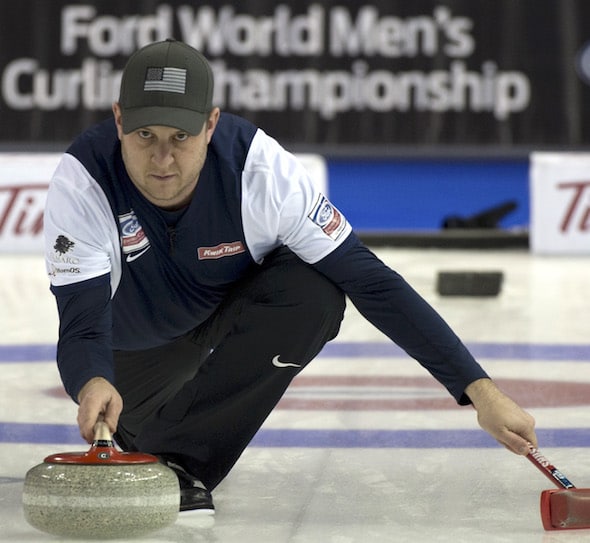 The Americans’ outlook wasn’t promising Monday night with a 2-3 record. But since then Shuster has reeled off those six straight wins at Northlands Coliseum, including a 7-3 eight-end victory over Sweden’s Niklas Edin, who is 8-2 heading into his final game against the Netherlands later Thursday (7 p.m., MT). “It’s a pretty good streak. We actually had a streak that was 19 games at one point this year,” said Shuster. “We have a team that is capable of putting together some pretty good runs. “As soon as the ice calmed down to where the ice was going to be, we sharpened up that much more.”

Shuster, who will play Switzerland’s Peter de Cruz in the Page 3-4 playoff game Saturday (2 p.m.), said he anticipates his team will be ready for the playoffs. “I expect if our team comes out and plays the way we did today no matter who we play against, we have a chance to win,” said Shuster, who is making his seventh appearance at the Ford Worlds and won the bronze medal in Basel, Switzerland, last year. “Those guys (Sweden) are a great team, but we had some really good rock position and when you get good rock position you can win some curling games.” Shuster’s team consists of third Tyler George, second Matt Hamilton, lead John Landsteiner, alternate Joe Polo and coach Phill Drobnick. With the playoff spot locked up and a fourth-place finish inevitable, the team decided to get Polo some action. Polo played lead against Sweden while second Matt Hamilton took the first five ends off before replacing Tyler George. After scoring two in the second end, Shuster opened up a 4-1 lead by stealing two in the fourth and was in control from there. “It was a bad game,” summarized Swedish skip Niklas Edin. “We didn’t keep our focus or have fun out there so we need to do something about that for the next game for sure. “We started missing in the first end, we didn’t seem to be on point on the line calls. We just need a better start in the next game and hopefully keep our heads high.” Sweden’s only other blip was an 8-5 loss to Canada’s Brad Gushue, who nailed down first place at 10-0 earlier in the day and will play in the Page 1-2 playoff game Friday (7 p.m.) against Sweden. “It’s been a good week. We’re winning every game, and we should have beat Gushue. This is the first game that was really a bad one,” said Edin, who won the 2013 world title in Victoria and the 2015 crown in Halifax.

The U.S. is tied for third with Switzerland at 8-3. The Swiss gave up three in the ninth end to suffer an 8-5 loss to China’s Rui Liu (5-5) Thursday afternoon; Switzerland will finish third and have hammer in the first end in the three-four game. In other games, Norway’s Steffen Walstad defeated Italy 7-5 and Scotland downed Germany 7-1 thanks to a steal of one in the eighth end and three in the ninth end. Along with Canada, other teams not playing in the afternoon draw were Japan (Yusuke Morozumi, 5-5), Netherlands (Jaap van Dorp, 1-9) and Russia (Alexey Timofeev, 0-10). Canada plays Norway in the final round-robin draw later Thursday (7 p.m.). For ticket and other event information, visit httphttps://www.curling.ca/2017worldmen/ This story will be posted in French as soon as possible at https://www.curling.ca/2017worldmen/?lang=fr TSN (RDS2 in French), the exclusive television network for Curling Canada’s Season of Champions, will provide complete coverage of the 2017 Ford Worlds.