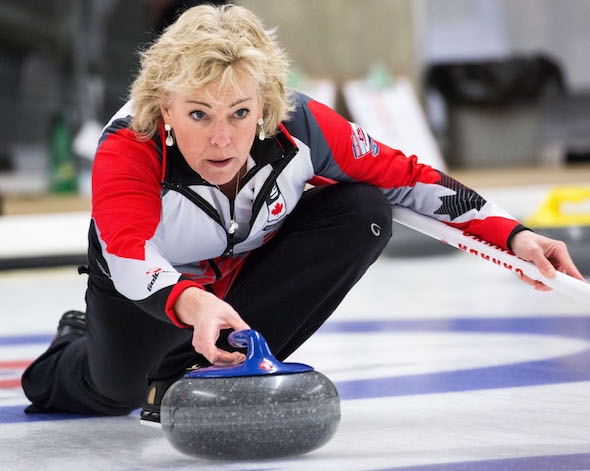 And as a result, Bryan Cochrane’s men’s team from Ottawa and Colleen Jones’s Halifax-based women’s team crept closer to locking up playoff berths — both are just a win away.

Jones, a two-time world women’s champ and six-time Scotties Tournament of Hearts champ, improved to 5-0 on Tuesday, romping to a 13-1 triumph over Lithuania’s Gaiva Valatkiene (1-4). Canada opened the game with deuces in the first four ends before Lithuania hit the scoreboard.

“We’re definitely in our groove, that’s exactly it,” said Kelly. “We didn’t feel like ourselves on the first day, but now there’s that familiar feeling and it’s so comfortable. Colleen today was, I think, a hundred per cent. Her throws were clean, confident, her thinking was clear.”

Canada is back in action later on Tuesday against Ireland’s Carolyn Hibberd (0-5) at 8:45 p.m. A win there would clinch a playoff berth, and if Canada can beat Japan’s Miyuki Kawamura (4-1) Wednesday at 4:30 p.m. (all times MT), the Jones team will clinch first in its pool and get a bye to Friday’s 2 p.m. semifinals.

“No, but today was pretty close. But it’s hard to judge when you’re not pushed,” she said. “We tried to practise some shots and situations that we’ll need later on. We’re getting pretty close. If we can keep up the play we had last night and today, then it’ll be good.” 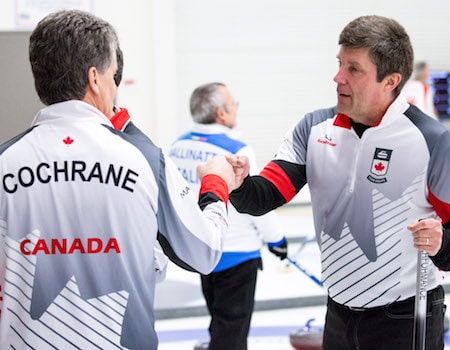 Rajala, whose parents are both Finnish, got into the lineup for the first time as Canada broke open a tight game through four ends by scoring three in the fifth end and stealing two in the sixth before the Finns conceded.

A victory over New Zealand’s Dan Mustapic (3-0) Tuesday at 4:30 p.m. will give Canada one of the top seeds in the eight-team quarter-finals. The three pool winners will be seeded 1-2-3, with the pre-game Draw Shot Challenge determining the seedings; Canada currently is well in front of the rest of the field in the DSC.

Meanwhile, at the World Mixed Doubles Championship, also being played at the ATB Centre, Canada’s Joanne Courtney (Edmonton) and Reid Carruthers (Winnipeg) will be back on the ice late Tuesday against  Germany’s Julia Meissner and Andy Büttner (2-2) at 9 p.m., looking to rebound from Monday’s loss to the Czech Republic.