Homan back on the ice – and winning

Rachel Homan enjoyed her September. Instead of playing every weekend, all over the map, she stayed in Ottawa and relaxed. Team Homan ran a junior curling camp, and they practiced. While the World Curling Tour schedule is on its eighth week, the Ottawa foursome spent the weekend playing only their second event of the season. 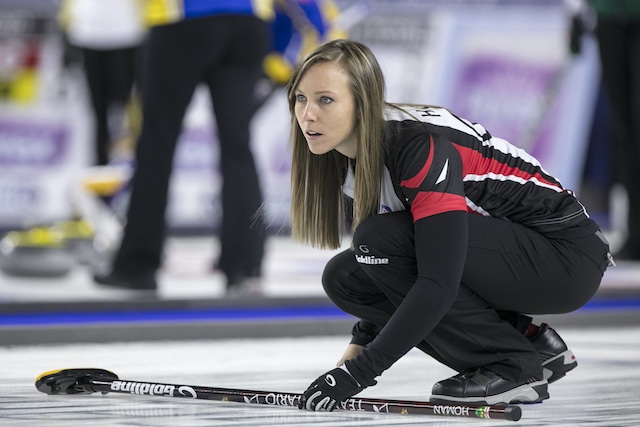 “It was great to get back on the ice together,” said Homan, whose squad (Emma Miskew, Joanne Courtney, and Lisa Weagle) went undefeated through the Prestige Hotels & Resorts Curling Classic in Vernon, B.C. With a perfect 8-0 record, they defeated a South Korean team skipped by Un-Chi Gim. “We didn’t need to pack our schedule in September,” said Homan at the Canadian Olympic Committee’s team uniform unveiling in Toronto. “We need to be ready in December. So, looking at our preparation for Worlds last year, we know exactly what we need to do to be ready for December.” The win earned them $9,000 and 51.148 points, which moves them up a spot to No. 2 on the WCT Order of Merit rankings. At the start of the season, Homan had a massive lead in the top spot, but a busy (and successful) early season from Anna Hasselborg moved the Swedes to No. 1. Homan, however, isn’t concerned with chasing points. “It’s not something that’s important this year,” she said. “We’re in the Scotties regardless, and what’s important for us is winning the Trials in December. That’s our number one goal this year, not playing in every event there is.” Meanwhile in Saskatoon, a hometown rink claimed top prize at the College Clean Restoration Curling Classic. A first-year squad skipped by Colton Flasch ran the table, finishing with a 4-3 win over South Korea’s Olympic team, skipped by Chang-Min Kim. The win earned Flasch (with Kevin Marsh, Daniel Marsh, and Trent Knapp) $9,000 and 53.776 points. Toronto’s John Epping and Winnipeg’s Jason Gunnlaugson each earned $4,000 and 32.650 for their semifinal finishes. Across the pond, reigning World Champion Brad Gushue won the Swiss Cup in Basel, Switzerland, for the fifth time, beating Norway’s Thomas Ulsrud in the final. The win, along with a quarterfinal exit by Sweden’s Niklas Edin, moves Gushue back into first place on the WCT rankings. The win also earned Team Gushue more than $18,000 CDN.