Canada locks up a playoff spot at World Mixed

Canada notched two more wins on Tuesday, including an extra-end nail-biter against Australia, to secure a spot in the playoffs at the World Mixed Curling Championship in Champéry, Switzerland. 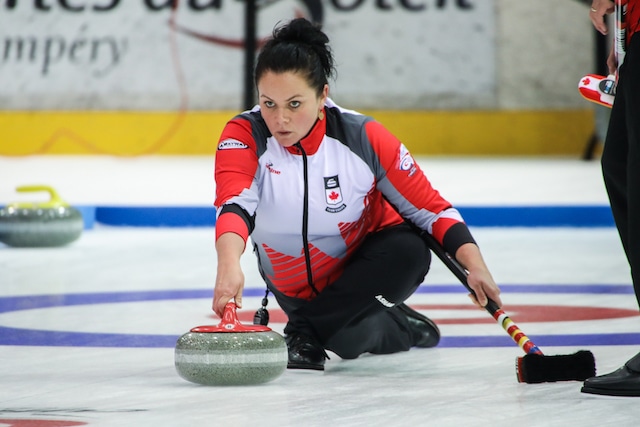 Trevor Bonot and his Northern Ontario crew of vice-skip Jackie McCormick, second Kory Carr, lead Megan Carr and coach Jim Waite had their hands full in the morning game against Australia’s Hugh Milliken – a transplanted Canadian who won gold at the 1986 Canadian Mixed playing with Ontario’s Dave Van Dine. Tied after eight ends, Bonot had to make a perfect draw to the button in the extra end for the 6-5 victory. “We’ve had to work for most wins this week, but it’s exciting to win that way,” Bonot said afterwards. “I think winning that is more important for our own psyche, making sure we get better every game. Even though that one went to an extra end we were playing better and had more opportunities to see ourselves growing. I think that’s more important than the win/loss column right now.” In the evening game, Canada cruised to victory over the Netherlands’ Danny Van Den Berg, who is still winless in the round robin. Canada opened with a steal of two and proceeded to steal the next four ends on the way to an 8-1 win. For Bonot, the chance to play two games in one day – for the first time in the tournament – was a bonus. “It’s a long time to sit around (playing one game a day),” said the Canadian skip. “Playing back-to-back you get more of a rhythm. The unfortunate side of that is as soon as we get this rhythm we have a 48-hour break so we’ll just have to learn from it and bring that into practice tomorrow. If you can get that win in the last round-robin game after the break and take that into the play-offs with some confidence, we’d really like that.” Canada has a day off and will play their final game of the round robin on Thursday at 2 p.m. ET against Germany, skipped by two-time World Women’s champion, Andrea Schoepp. Fans can follow the live scoring at www.worldcurling.org/wmxcc2017/livescores. The 38 teams in Champéry are split into five pools, with the top three finishers in each pool, plus the fourth-place team with the best Draw-Shot Challenge total, advancing to the 16-team, single-knockout playoffs. The playoffs begin on Friday, Oct. 13, with the semifinals and gold- and bronze-medal games slated for Saturday, Oct. 14. Selected playoff games, including the gold-medal game, will be streamed live on the World Curling Federation’s YouTube channel, www.youtube.com/user/WorldCurlingTV For the event schedule, live results, teams and news visit www.worldcurling.org/wmxcc2017 Team Canada updates will be available at curling.ca.