Next stop semifinals for Team Canada at World Mixed

Team Canada’s Trevor Bonot cruised to a 9-1 win over Russia’s Alexey Stukalskiy in quarter-final action at the World Mixed Curling Championship in Champéry, Switzerland this afternoon and will move on to tomorrow’s semifinal. 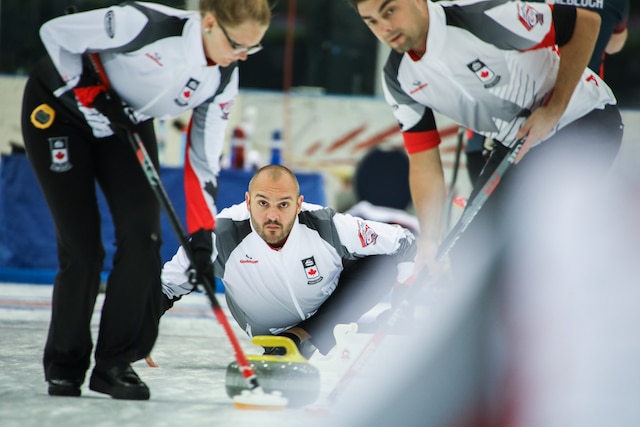 Bonot and his Northern Ontario team of vice-skip Jackie McCormick, second Kory Carr, lead Megan Carr and coach Jim Waite used their control of draw weight to jump out to a quick 5-0 lead, blanking the first end, then scoring three in the second and stealing another two in the third. Canada kept the pressure on, forcing errors from a young Russian team that struggled with weight and line. Russia managed to score a single in the fifth, but Canada answered with a deuce in six, and it was handshakes on a 9-1 Canadian victory – and a spot in the semifinal on Saturday against Norway’s Ingvild Skaga. “Honestly we aren’t usually overly aggressive but we are comfortable that way and we know we can make the shot,” said Bonot. “So, we just went with it. We love to hit too, so once we got that nice comfortable lead, they’re such a great team, we didn’t want to take anything for granted, so we wanted as few rocks out there as possible. That was our best game of the week. We really liked the ice tonight and we finally got the pep in our step that we’ve been waiting to get.” The semifinals take place on Saturday at 3 a.m. ET, with the gold- and bronze-medal games scheduled for 8 a.m. ET. Streaming of selected playoff games, including the gold-medal final, can be found on the World Curling Federation’s YouTube channel, www.youtube.com/user/WorldCurlingTV. For the event schedule, live results, teams and news visit www.worldcurling.org/wmxcc2017