While it’s a relatively quiet week on the World Curling Tour for the women, the “Men of Curling” are making headlines in more ways than one. 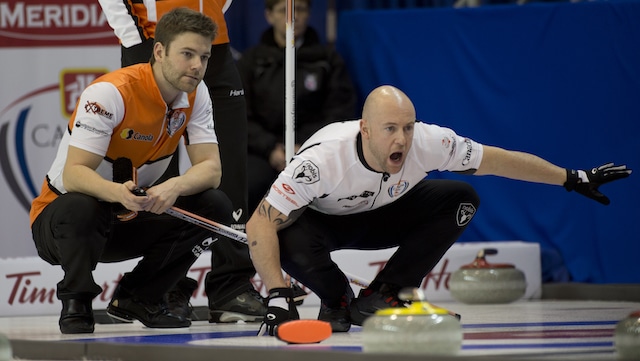 The 2018 edition of the popular “Men of Curling” calendar was announced this week, featuring 15 male curlers from around the world. Proceeds from the sales of the calendar help support the Curling Canada Foundation’s junior curling development programs. Additionally, each athlete has chosen a charity to which his portion of the calendar proceeds will go. Of the eight Canadian curlers in the sometimes risqué photos, seven are playing this weekend in the Canad Inns Men’s Classic in Portage la Prairie, Man. Aside from Team Gushue (including calendar boy Brett Gallant), the next six top-ranked teams on the Canadian Team Ranking System are all part of Portage’s 32-team field, fighting over a share of $60,000. The participating calendar models, in CTRS order, are: No 2. Team Carruthers – Both lead Colin Hodgson and vice Braeden Moskowy posed for the calendar. Hodgson’s charity is the Smiles Thru Lindsey Foundation and Moskowy’s proceeds will benefit the Sandra Schmirler Foundation. No 3. Team Jacobs – Olympic Gold medallist lead Ryan Harnden will be raising funds for the Capital Projects Fund of the Community First Curling Centre. Third Ryan Fry also participated with the same charity in mind. No 6. Team Koe – Another Olympic gold medallist is featured on the cover of this year’s calendar. Calgary’s Marc Kennedy has chosen the Canadian Breast Cancer Foundation and Simply Supper Helps as his worthy causes. No. 7 Team Laycock – Kirk Muyres, the third for Steve Laycock’s Saskatoon foursome, posed to benefit Mental Health in Agriculture. Winnipeg’s Mike McEwen (No.4) and Toronto’s John Epping (No.5) are also in the field, along with Toronto’s Glenn Howard, Saskatoon’s Colton Flasch, and 2017 Canadian Junior champion Tyler Tardi (Langley, B.C.).