If you found this fall’s World Curling Tour season a little slow getting up to speed, buckle up, because they’re about to step on the gas. 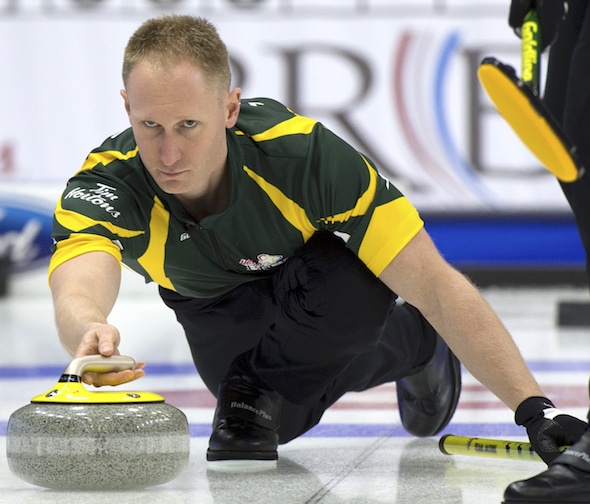 Brad Jacobs and his Sault Ste. Marie, Ont., team are off to a perfect start at the Grand Slam Masters in Lloydminster, Sask. (Photo, Curling Canada/Michael Burns)

While teams have been pacing themselves thus far by being picky about which events to play, this weekend’s Grand Slam of Curling event in Lloydminster, Sask., will host the full field of elite curlers who are all gearing up for major events in the upcoming weeks.

The Masters of Curling, the second Grand Slam event of the season, features 15 of the top teams from both the men’s and women’s points rankings. Currently the upper tier of the men’s leaderboard features Brad Gushue (St. John’s) in the top spot, followed closely by Sweden’s Niklas Edin at No. 2, and Brad Jacobs (Sault Ste. Marie, Ont.) at No. 3.

Gushue, Edin, and Jacobs have all started the round-robin phase of the Masters with 2-0 records, as did Calgary’s Kevin Koe (World rank No. 5).

The women’s No.1 spot is currently held by Sweden’s Anna Hasselborg, although Ottawa’s Rachel Homan is looking to change that this weekend. Homan has held the No. 1 spot for most of the past several seasons, but Hasselborg has passed her in recent weeks after a hot start to the season, while Homan’s team chose to play a less busy schedule.

Homan, however, is not off to a great start to the weekend with two losses out of the gate. Hasselborg won her first game.

Winnipeg’s Jennifer Jones holds the No. 3 spot, Switzerland’s Silvana Tirinzoni, who recently won the Swiss Olympic Trials to earn a berth in the 2018 Winter Olympics, is No. 4, while Edmonton’s Val Sweeting is No. 5. Jones and Tirinzoni both have two wins to start the weekend, while Sweeting joins Homan with an 0-2 record.

The rest of the field extends down the World Curling Tour Order of Merit rankings to No. 15, as they stood on Sept. 19.  If a team declined an entry, the next highest-ranked team was invited.

Both the men and women are competing for eight playoff spots, and a chance for the top prize of $30,000. The total purse is worth $125,000 for each gender.

Many of the teams involved will be using this as their final tune-up before the Home Hardware Road to the Roar pre-trials in Summerside, P.E.I., while others will have another few weeks of competition, including another Slam, before the big show: the Tim Hortons Roar of the Rings in Ottawa, the first week of December.

In Sarnia, Ont., meanwhile, more teams with Olympic aspirations are battling it out at the Huron Reprographics Oil Heritage Classic.

Hometown team Mark Bice, along with Dayna Deruelle of Kingston, Ont. and Glenn Howard of Etobicoke, Ont., are all preparing for the Home Hardware Road to the Roar, while four of the five teams who will battle at the U.S. Olympic Men’s Curling Trials next month in Omaha, Neb. — Todd Birr, Craig Brown Brady Clark and Heath McCormick — are in the field.

Also, many of Atlantic Canada’s big teams are gathering in Halifax this weekend for a major event at the Mayflower Club.

Murphy and Breen are both tuning up for the Home Hardware Road to the Roar.

Check curlingzone.com for the latest scores.