With the Canadian Olympic qualifying events just around the corner, two previous gold-medallists found themselves on top of the podium once again this weekend. 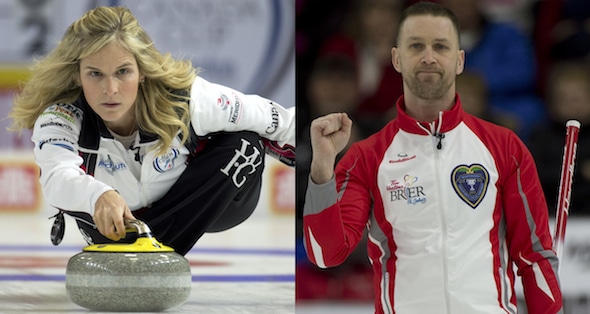 Jennifer Jones, left, and Brad Gushue picked up big wins as they continue tuning up for the 2017 Tim Hortons Roar of the Rings in Ottawa. (Photos, Curling Canada/Michael Burns)

While the two 15-team fields at the Grand Slam’s Masters of Curling in Lloydminster, Sask. featured most of the teams still vying for the right to wear the Maple Leaf in Pyeongchang, South Korea, the winning skips had both been there, and done that.

In the second Slam of the season, 2006 Olympic champion Brad Gushue and 2014 winner Jennifer Jones were victorious once again. The Slam event paid each team $30,000 for the wins, and also came with substantial World Curling Tour Order of Merit points.

Meanwhile, Jones took home 82.053 points for her undefeated run through the bonspiel, finishing with a 6-5 win over fellow Winnipegger Kerri Einarson. Jones (with Kaitlyn Lawes, Jill Officer, and Dawn McEwen) moved into No. 2 on the WCT list, passing Ottawa’s Rachel Homan who failed to qualify in the event.

Sweden’s Anna Hasselborg, who lost the semifinal to Jones, earned 49.818 points, which was enough to maintain her No. 1 ranking. The Swedes, along with Scotland’s Eve Muirhead, earned $12,000 for their semifinal finish, and both will be in the field in Pyeongchang.

Einarson earned 64.471 points for the runner-up finish, which moves her into the WCT’s top ten.

On the men’s side, Winnipeg’s Mike McEwen and Calgary’s Kevin Koe reached the semifinals, earning $12,000 and 51.086 points.

Jones, Gushue, Koe and McEwen will be among the hopefuls at the 2017 Tim Hortons Roar of the Rings, Dec. 2-10 in Ottawa, where Canada’s four-player Olympic teams will be decided.

In Sarnia, Ont., Glenn Howard (Etobicoke, Ont.) qualified through the C-side of the draw, and went on to run the table in the playoffs winning the Huron Reprographics Oil Heritage Classic. Howard earned $4,800 and 30.864 points for his final win over Brady Clark of the U.S. Sarnia’s Mark Bice and Woodstock, Ont.’s Mark Kean were semifinalists.

In Halifax, Mark Dacey took home the $5,000 prize for winning the Dave Jones Alexander Keith’s Mayflower Cash Spiel. Finalist Chad Stevens won $3,000 for his runner up result. On the women’s side, Jill Brothers took home $3,000 for beating Theresa Breen in the final. It was the third year in a row that Brothers has won the event.

Einarson, Howard, Bice, Fleury and Breen are all headed to Summerside, P.E.I., for the 2017 Home Hardware Road to the Roar Pre-Trials, beginning Monday. Two teams of each gender will qualify out of that event for the Tim Hortons Roar of the Rings.