Canada’s first Olympic mixed doubles curling team will be decided next January in Portage la Prairie, Man., and fans from coast to coast will see the winner declared on CBC Sports, it was announced today by Curling Canada. 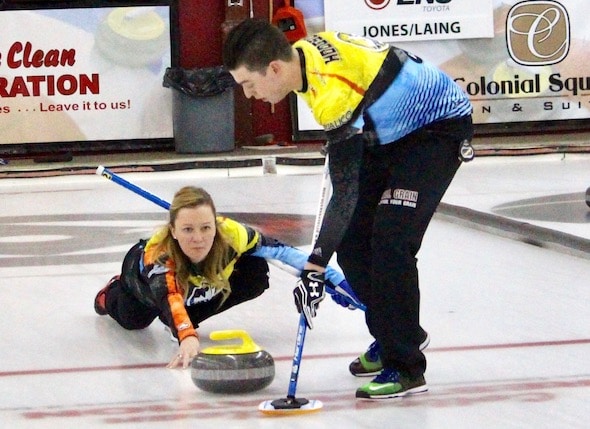 Additionally, the event will now be known as the Canad Inns Canadian Mixed Doubles Trials, thanks to a sponsorship agreement also announced today in conjunction with the Manitoba-based chain of hotels.

A new agreement with Canada’s Olympic Network will see CBC Sports not only televise the closing weekend of the 2018 Canad Inns Canadian Mixed Doubles Trials, it will provide extensive streaming coverage of the round-robin games leading into the weekend playoffs, both for the 2018 and 2022 Trials. In addition, Radio-Canada will offer live-streaming coverage of the closing weekend of the 2018 Trials.

“We’re excited to see this new Olympic discipline get exposure like this on Canada’s Olympic Network,” said Katherine Henderson, Chief Executive Officer of Curling Canada. “That, combined with our new partnership with Canad Inns, gives another layer of excitement to the first Mixed Doubles Trials, and we know it’s going to be a terrific show in Portage la Prairie, both in the arena and on television.”

CBC, which recently announced its plans for the online streaming of five other Curling Canada championships, will be giving many fans their first exposure to mixed doubles curling, which was accepted as an Olympic medal sport by the International Olympic Committee in June 2015.

“The Mixed Doubles Trials is a highlight of our new partnership with Curling Canada and we are very much looking forward to sharing this exciting event with audiences across the country in 2018 and 2022,” said Greg Stremlaw, Executive Director, CBC Sports and General Manager, Olympics. “As Canada’s Olympic Network we share the stories of Canadian high-performance athletes on their journey to the Olympic Games and events like this add to our storytelling opportunities.”

CBC Sports’ broadcast and streaming schedules have not yet been finalized, however, once available this information will be posted here. In the meantime, fans can set up calendar alerts to notify them of CBC Sports’ streaming coverage here and can follow the latest news from the curling world on the dedicated curling page at cbcsports.ca.

With 14 locations in Manitoba, Canad Inns is Manitoba’s largest hospitality provider, and with its affiliated restaurants and nightclubs serves more than nine million customers per year.

“It’s no secret that like many of our customers, we are passionate about the sport of curling, and we’re thrilled to partner with Curling Canada for the first Canadian Trials for mixed doubles curling,” said Cindy Carswell, Vice President of Community Relations for Canad Inns. “Canad Inns is a Manitoba-owned, Manitoba-grown and Manitoba-proud company and we are honoured to be the Title Sponsor of these Trials taking place in Portage la Prairie, Man. Canad Inns Destination Centre Portage la Prairie is already gearing up to host this country’s best curlers, and we will continue to show our dedication and support to those athletes, their coaches and their friends and family.”

A total of 18 teams will be in Portage la Prairie, in hopes of wearing the Maple Leaf at the 2018 Olympic Winter Games in Pyeongchang, South Korea.

The Trials will feature 18 teams, split into two pools of nine, and eight teams will move into a modified double-knockout playoffs.

Here is the full list of teams that have been invited, in order of their current standing on the CMDR:

Information on how teams can name replacement players can be found by CLICKING HERE.

“This is an amazingly talented field, but just as important, it’s an amazingly committed field,” said Jeff Stoughton, national coach of Canada’s mixed doubles program. “We know it’s going to take a special team to play for a gold medal in Pyeongchang, but I’m confident that the teams competing in Portage la Prairie have the skills and knowledge base to represent our country proudly in February.”

The Olympic mixed doubles competition will get underway on the Thursday prior to the Opening Ceremonies in Pyeongchang.