SUMMERSIDE, P.E.I. — Sherry Middaugh got off to a winning start on Monday at the 2017 Home Hardware Road to the Roar Pre-Trials at Credit Union Place. 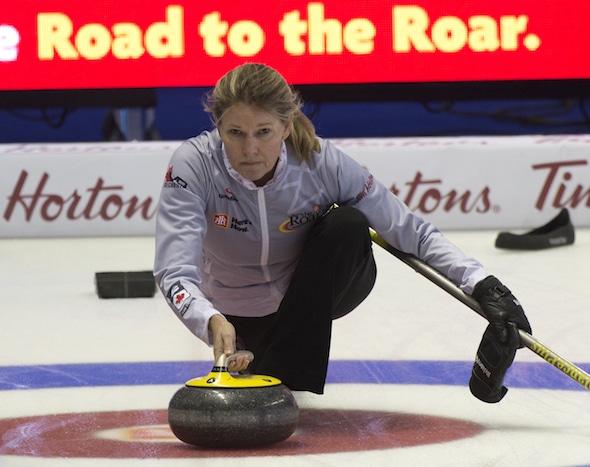 Middaugh’s team is looking to get back to the Tim Hortons Roar of the Rings and take one step higher on the podium after losing in the 2013 final to Jennifer Jones in Winnipeg — a loss that Middaugh admits still affects her.

“You know what? It still hurts,” said Middaugh. “The fact that we were that close, and we know how hard we worked to get there. We were that close, and who knows if we’ll get there again? I’ll tell you, it’s a lot of work to play week in, week out. And it’s even harder now that (husband) Wayne’s not curling. We just did our own thing during curling season, but now that he’s not playing, it’s definitely tougher to leave home, I do have to admit.”

Middaugh’s team, which is intact from that 2013 run to the Trials final, showed its veteran toughness against Robertson, recovering from giving up a steal of two in the seventh end to rally for the victory.

“I felt like we were in control; we were one up with (hammer) and then we give up a steal of two by getting sloppy, some half-shots, a couple misses,” said Middaugh. “But we were still in a good position. You just hope that experience helps, but really, the youth in this field, even though they haven’t been on this stage, they’re still great curlers, they’ve had a lot of success on the circuit. But you kind of hope that being in this kind of atmosphere blinds them a little bit. We’ve seen that even with the top teams at the Trials; you say the word ‘Olympics’ and all of a sudden things are very different and they don’t perform.”

Fourteen women’s and 14 men’s teams are in Summerside; the teams are split into seven-team pools for round-robin play, leading to the crossover playoffs beginning Saturday.

Other Draw 1 results (all women’s games) saw Edmonton’s Kelsey Rocque steal three in the 10th end for a 6-3 win over Calgary’s Nadine Scotland after Scotland was light on her last-rock draw that needed to bite the button; Winnipeg’s Shannon Birchard stole a key single in the sixth end en route to a 6-5 victory over Julie Tippin (Woodstock, Ont.); and Kerri Einarson (East St. Paul, Man.) scored four in the 10th end for an 11-7 win over Karla Thompson (Kamloops, B.C.).