SUMMERSIDE, P.E.I. — Kerri Einarson and her team from East St. Paul, Man., put together another strong outing Tuesday night at Credit Union Place and find themselves among the leaders at the 2017 Home Hardware Road to the Roar Pre-Trials. 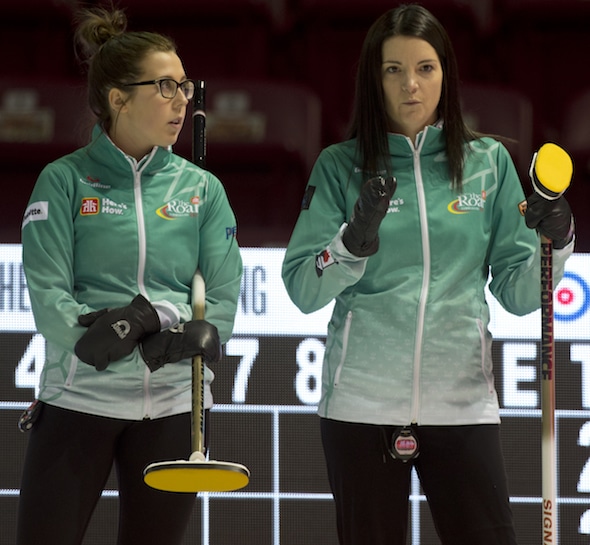 Einarson, backed up by vice-skip Selena Kaatz, second Liz Fyfe and lead Kristin MacCuish, stole three in both the first and third ends and sailed to a 9-4 victory over Winnipeg’s Darcy Robertson (1-2).

The victory left Team Einarson as the lone unbeaten entry in Pool B in the 14-team women’s competition, while Edmonton’s Kelsey Rocque is the only team with a perfect log (2-0) in Pool A.

Einarson, whose team has taken significant strides in the past two seasons, said the early performance in Summerside has been the product of a lot of hard work over the summer.

“It’s pretty awesome; we’re super-excited to be here, and it’s something we’ve been working towards,” said Einarson, 30. “We’ve been playing well, and tonight was another well-played game; we put some big pressure on them. We’re proud of that performance.”

The big early lead certainly helped Team Einarson get in a shot-making groove; overall, the team checked in at 88 per cent for the evening, with Einarson at 89 on fourth stone.

But the key, suggested Einarson, is to be able to play like that on a consistent basis in events such as the Home Hardware Road to the Roar, where visions of Olympic gold provide a tension-filled subtext to every game.

“It’s a different mind-set,” she admitted. “You definitely want to focus on being consistent with every single game; that’s what we’ve been focusing on instead of throwing a 95 per cent game in one game, and then throwing a 60 in the next. We’ve been more consistent with our play this season.

“You need to be consistent in this sport; anything can happen, and you always want to be sharp.”

While Einarson was busy taking care of Team Robertson, Rocque’s team was handling its own business on Sheet A, knocking off previously undefeated Theresa Breen of Halifax (2-1) 6-5.

In other women’s games on Tuesday night, Nadine Scotland of Calgary (1-2) hit the win column, stealing the winning point in the 10th end for a 6-5 win over Tracy Fleury (1-1; Sudbury, Ont.); and Shannon Kleibrink (Okotoks, Alta.) evened her record at 1-1 with a 7-2 triumph over Winnipeg’s Shannon Birchard (1-2).

In the only men’s game Tuesday night, Winnipeg’s William Lyburn prevailed in a low-scoring affair, scoring one in the 10th end for a 3-2 win over Edmonton’s Brendan Bottcher (0-2).