SUMMERSIDE, P.E.I. — From the perspective of recent history, Krista McCarville’s team from Thunder Bay, Ont., arrived at the 2017 Home Hardware Road to the Roar Pre-Trials as one of the favoured women’s entries. 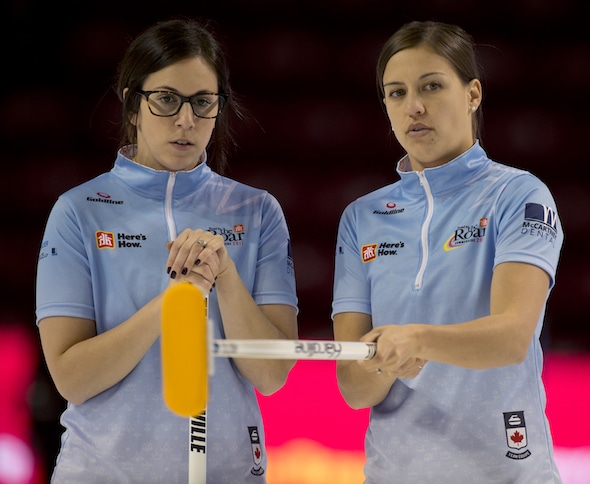 That was only natural, considering McCarville, vice-skip Kendra Lilly, second Ashley Sippala, lead Sarah Potts and coach Lorraine Lang have made the playoffs at the past two Scotties Tournament of Hearts, winning silver in 2016 at Grande Prairie, Alta., and losing the bronze-medal game last February in St. Catharines, Ont.

And while McCarville, 34, acknowledges that it might be natural for curling fans and prognosticators to think in those terms, she’d prefer to keep her team’s focus firmly on the task at hand.

“I think just because we’ve done well at the Scotties the past couple of years, people are talking about us,” conceded McCarville, moments after a 7-3 win over Karla Thompson (1-3) of Kamloops, B.C., Wednesday evening at Credit Union Place. “But, I mean, look at the field — everybody has lost a game. It’s such an even field; who knows who’s going to come out of here? It’s going to be busy for the statisticians, for sure.”

It may indeed take a crew of statisticians to sort out the possibilities heading into the final two days of round-robin play; McCarville’s team, 2-1, is in a four-way tie for top spot in Pool B with Sherry Middaugh (Coldwater, Ont.), Kerri Einarson (East St. Paul, Man.) and Jacqueline Harrison (Mississauga, Ont.), with Briane Meilleur of Winnipeg also in the mix at 2-2.

But, insisted McCarville, the playoffs — three teams in each seven-team pool will advance — will sort themselves out some time late Friday night.

“It’s way too early to think about that,” she said. “Just focus on the ice, focus on our technical abilities, eating right, staying hydrated, getting enough sleep. Control what you can control; don’t worry about anything else.”

McCarville took early control against Thompson with a first-end deuce and a steal of one in the second. But Thompson rallied to tie it 3-3 with a sixth-end steal of one before McCarville turned up the heat in the final four ends to pull out the win.

“We started out really good in the first three ends tonight, we felt really strong, and then kind of just slowly we were going a bit downhill,” said McCarville. :But you know what? The big thing is being positive, staying together as a team, picking each other up when we need to — I think that’s really important, and I think we did that well this game.”

It was the lone women’s game on Wednesday night.

And moments later, on Sheet D, Edmonton’s Charley Thomas remained unbeaten at 3-0, stealing the winning point in the 11th when Jean-Michel Ménard (2-2; Saint-Romuald Que.) came up agonizingly short on his last-shot outturn draw (CLICK HERE to see the last shot).

Thomas forced the extra end with a stunning angle runback to score two in the 10th end; CLICK HERE to see the game-tying shot in the 10th.

NOTE TO EDITORS: Draw reports from the 2017 Home Hardware Road to the Roar will be sent out to media twice daily beginning on Tuesday. Other draw reports, including quotes, will be available at www.curling.ca/2017roadtotheroar/news/.