SUMMERSIDE, P.E.I. — Jamie Murphy and his Halifax team showed some veteran resolve down the stretch and it paid off with a crucial win Wednesday morning at the 2017 Home Hardware Road to the Roar Pre-Trials. 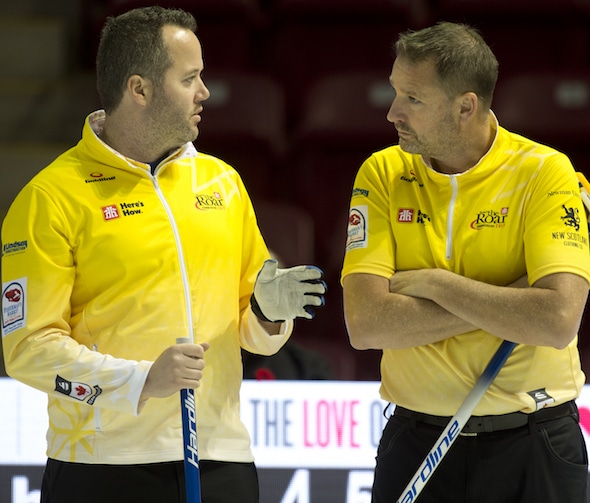 Murphy, backed up by third Paul Flemming, second Scott Saccary, lead Phil Crowell, alternate Jordan Pinder and coach Bruce Lohnes, trailed 5-2 at the fifth-end break after his opposite number, Winnipeg’s Jason Gunnlaugson, made arguably the shot of the Pre-Trials — a thin double takeout to score three (CLICK HERE to see video of the shot).

But instead of folding their tents, Murphy and his ’mates buckled down, blanking the next two ends, cracking a game-tying three in the eighth, stealing one in nine, forcing Gunnlaugson to settle for one in the 10th and then scoring the winning point in the extra end without Murphy needing to throw his final stone.

“It was a back and forth game,” said Murphy afterwards. “He made a great shot in the fifth for three, but we got a break in the eighth on his last shot with a miss so we got the three back. We knew we just had to be patient. He just made a great shot in five, but we just tried to stay positive.

“I guess that it was such a good shot that it didn’t affect us too much because we couldn’t have really done a lot more (to prevent it). You don’t see those kinds of shots made very often, but he tends to make a lot of them. But you couldn’t be frustrated; it was a great shot and hats off to him.”

Murphy, 36, lost his Home Hardware Road to the Roar opener, 9-3 to John Morris of Vernon, B.C., but has bounced back with two straight wins and is in the mix at the top of the standings of Pool A (there are 14 teams, split into a pair of seven-team pools), with Morris and Glenn Howard (Etobicoke, Ont.) both at 2-0.

“After we lost the first one, we felt like we needed to come out and win a couple games to position ourselves for the rest of the week,” said Murphy. “With only six games in the round robin, you realistically have to think you need to be 4-2 with a good last-shot draw total. It’s a massive thing, for sure (to be 2-1 instead of 1-2); we have a big game tonight against (Glenn) Howard. But they’re all big games from here, I guess.”

In other men’s play on Wednesday morning, Charlottetown resident Adam Casey and his Regina-based team (1-1) stole a crushing three in the seventh end en route to an 8-4 win over Mark Bice (0-3; Sarnia, Ont.).

The 2017 Home Hardware Road to the Roar continues on Wednesday with draws at noon, 4 p.m. and 8 p.m. (all times Atlantic).