SUMMERSIDE, P.E.I. — An opening-day loss on Monday at the 2017 Home Hardware Road to the Roar Pre-Trials has been long forgotten by Julie Tippin and her teammates. 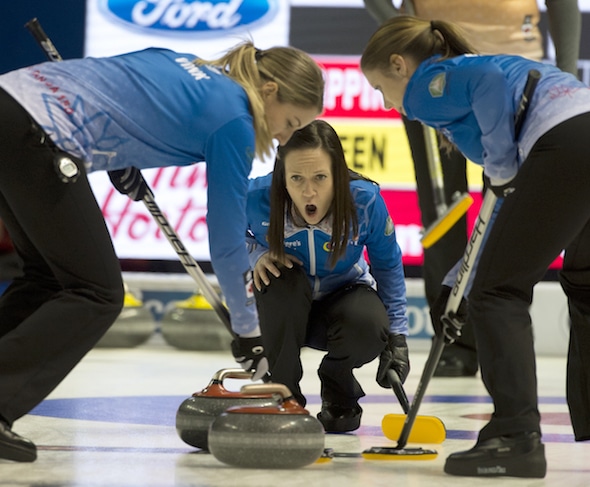 The win propelled Team Tippin (2-1) into a tie for top spot in Pool A of the 14-team, two-pool women’s competition, deadlocked with Edmonton’s Kelsey Rocque, who lost her first game on Wednesday.

Tippin said the Day 1 loss to Winnipeg’s Shannon Birchard was relatively easy to get over.

“We just didn’t come out super strong; we struggled a little bit with the ice when it was really humid outside, so we had trouble getting our draw weight,” explained Tippin, 34. “But since then, the ice has been completely different. It’s much colder outside, there’s no frost, and all of the draw weight has been really consistent. And we’re playing much better.”

The Team Tippin fans have been enthusiastic this week in Summerside. (Photo, Curling Canada)

That mastery of draw weight has been a key in the team’s two-game win streak, which included a 7-5 win over Calgary’s Nadine Scotland on Tuesday.

“We knew that once we got a handle on draw weight, we’d be able to come out much stronger,” she said. “Confidence in draw weight is a big thing, especially for a skip. You need to be able to draw the four-foot all the time, and until you get that, you’re not going to be in games. Today I felt a lot better, I had great draw weight.”

Tippin, who fired an 88 per cent game at Team Breen, raced to an early lead by scoring one in the second end, stealing two in the third and one more in the fourth and never looked back.

That set up what should be a nice evening with the friends and family that have invaded Summerside, taking over one of the luxury boxes at Credit Union Place, and contributing to the team having a chance to relax and forget about high-stakes curling for a few hours.

“They rented the box a long time ago,” said Tippin with a smile. “I think we had 23 people here today, friends, families and sponsors — it’s  pretty amazing. We have a lot of support. It makes the experience so wonderful; we’ve been spending time with the between games, going out for dinners, and it makes for a fun week. We did a lot of planning for the week and making sure we take time away from the rink. We’ve travelled a lot and we found when we got out, saw some sights, did some different things, it worked best for us.”