SUMMERSIDE, P.E.I. — This isn’t the first time John Morris has been involved with a lineup change in the middle of a big event. 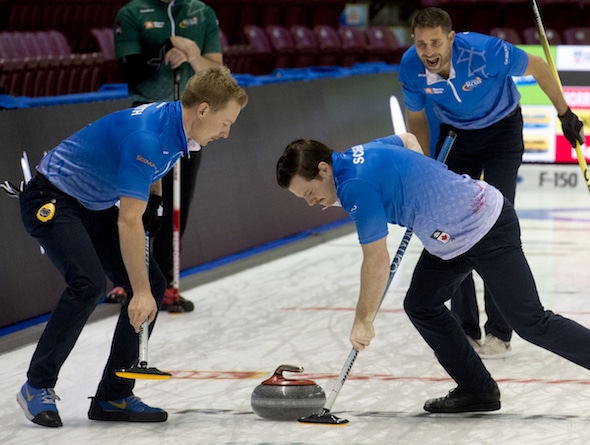 You may remember the last time, even if Morris doesn’t (or pretends not to).

“When was that? I don’t remember,” said a chuckling Morris when asked about it Friday morning at Credit Union Place during the 2017 Home Hardware Road to the Roar Pre-Trials.

For Morris’s benefit, we will tell you that it happened during the 2015 Tim Hortons Brier in Calgary, where Morris was skipping Team Canada. After a rough opening three days of the Brier, Morris demoted himself to third, giving shot-calling and last-rock duties to Pat Simmons. Six days later, that juggled lineup was hoisting the Brier Tankard after Simmons drew to the button for the extra-end victory in the gold-medal game.

This time around, it’s Morris taking over last-rock duties on the Vernon, B.C., team he was skipping (while throwing third rocks), with regular last-rock thrower Jim Cotter now throwing third.

It paid off on Friday morning with a solid 8-4 win over Winnipeg’s Jason Gunnlaugson, lifting Team Morris to a 3-2 record and firmly in the playoff picture in Pool A, while Gunnlaugson dropped to 2-3.

“We haven’t really been on all year; made a few quarter-finals but we haven’t found that magic yet,” explained Morris, who won Olympic gold in 2010 playing third for Kevin Martin. “We just felt we needed to make a little change; we’re looking at it as positive as we can, that we still have control of our own destiny and if we win two games today, we’re in great shape going int the weekend.”

Lineup change for @TeamMorrisBC this morning, as Johnny Mo is throwing the brick and Jim Cotter is throwing third. John makes this draw to score two and take a 5-3 lead after 6 ends against Team Gunnlaugson #curling #RTTR2017 pic.twitter.com/9upwCUsuEE

The decision was made Thursday night during a heart-to-heart between Morris and Cotter.

“He was feeling like he’s mentally and physically strong; he just hasn’t been getting the results he was looking for. Jim would do absolutely anything for the team, anything for his family, anything for his friends. He’s such a great guy. So just he said, ‘What’s our best move going forward?’ ”

This move paid off; the Morris team was scored at 90 for the game, and really didn’t give Gunnlaugson a sniff en route to the win.

“Sometimes if a team ain’t firing, and you keep spinning your wheels in the mud, it’s frustrating for the team and sometimes a shakeup here or there isn’t a bad thing,” said Morris. “You have to make sure you do it at the right time and have everyone on board. We’re all on board a hundred per cent, and Jimmy played fantastic out there today. He was Jimmy the Kid that we all know. It was great to see; he gave me some easy shots out there, and now we’re all gung-ho going forward. We’ll see what happens.

“It’s desperate curling now; that’s what gets me going.”

Morris would lock up one of the three playoff berths in Pool A with a win in his last game Friday night against Glenn Howard of Etobicoke, Ont. (5-0).

Howard locked up first place on Friday morning, making a hit for two in the 10th end to dispatch Adam Casey of Regina 7-6. At 2-3, Casey is still in the mix for a tiebreaker, as are numerous other teams, with dozens of tiebreaker scenarios in play that will be whittled down as the day goes on.

That was a real battle, but in the end, it’s a hit for Glenn Howard for 2️⃣ and the win! Final score: @TeamGlennHoward 7 Team Casey 6. #curling #RTTR2017 pic.twitter.com/WcjGSZSrex

In the other men’s game Friday morning, Halifax’s Jamie Murphy drew to the button in the 11th end to defeated Saskatoon’s Colton Flasch 6-5, leaving both teams with 2-3 records and still alive.

It’s a draw to the button for the win in extras, and the pride of Halifax, Jamie Murphy, is cool under pressure! It’s a 6-5 win over @TeamFlasch #curling #rttr2017 # pic.twitter.com/uaZv13XfFb

In women’s play, Winnipeg’s Kerri Einarson took a huge step toward locking up a playoff spot with a drama-filled 9-8 win over Sherry Middaugh of Coldwater, Ont. Einarson led 5-0 after a second-end steal of three, but was forced to draw to the button in the 11th end to nail down the win and improve to 4-1. A win in her final game against Krista McCarville (3-2; Thunder Bay, Ont.) would clinch first in Pool B for Team Einarson.

Some more extra-end drama! This time it’s Kerri Einarson delivering the game-winner to finish off a wild 9-8 victory for @TeamEinarson over Team Middaugh! Both teams still in the playoff race! #curling #RTTR2017 pic.twitter.com/TtFz71a5xC

In the other women’s game, McCarville kept her playoff hopes alive with an 8-6 win over Jacqueline Harrison (2-3) of Mississauga, Ont., with McCarville drawing the four-foot in the 10th looking at three Harrison counters.

A massive win for @TeamMcCarville! Krista makes the cold draw to the 4-foot to finish off an 8-6 win over Team Harrison to stay in the playoff picture. #curling #RTTR2017 pic.twitter.com/vAlw83DQ4H