Tiebreaker wins for Gunnlaugson, Deruelle, Middaugh at Road to the Roar 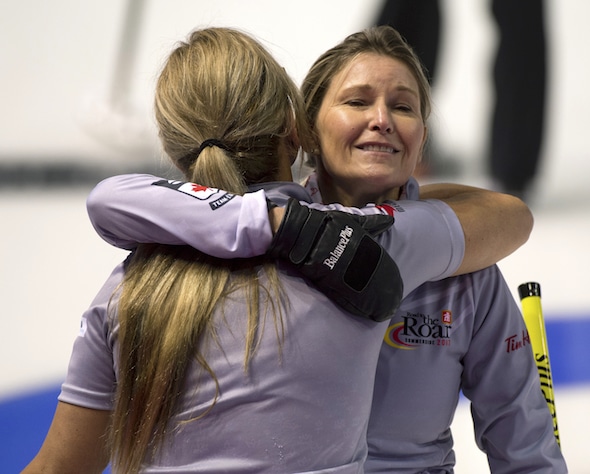 All three teams won early morning 2017 Home Hardware Road to the Roar Pre-Trials tiebreaker games Saturday at Credit Union Place to move further in their bid to qualify for the 2017 Tim Hortons Roar of the Rings next month in Ottawa.

In men’s play, Gunnlaugson was able to nail down the third and final playoff position in Pool A of the round robin, making a hit for a single point in the 10th end to beat Halifax’s Jamie Murphy 6-4.

With the victory, Gunnlaugson, vice-skip Alex Forrest, second Ian McMillan, lead Connor Njegovan and coach Randy Neufeld advance to the B-side quarter-final Saturday at 7 p.m. (all times Atlantic) against the loser of the A-side semi between Glenn Howard of Etobicoke, Ont., and Brendan Bottcher of Edmonton (1:30 p.m.; TSN).

With the win, Team Deruelle advances to a second tiebreaker round to decide third place in Pool B, and will play Greg Balsdon of Kingston, Ont. at 3:30 p.m. Saturday. The winner of that game clinches the final playoff spot, and will play Saturday at 8:30 p.m. against the loser of the A-side semifinal between Charley Thomas of Edmonton and John Morris of Vernon, B.C. (1:30 p.m.).

The victory nailed down third place in Pool B for Team Middaugh, who will return to the ice Saturday at 7 p.m. against the loser of the A-side semifinal between Kelsey Rocque of Edmonton and Krista McCarville of Thunder Bay, Ont.

Another women’s tiebreaker is scheduled for 12:30 p.m. between Nadine Scotland of Calgary and Shannon Birchard of Winnipeg; the winner will clinch third in Pool A and play Saturday at 7 p.m. against the loser of the other A-side semifinal between Julie Tippin of Woodstock, Ont., and Briane Meilleur of Winnipeg.