SUMMERSIDE, P.E.I. — It’s a familiar story for John Morris and his Vernon, B.C., teammates, only they’re hoping for a different ending this time around. 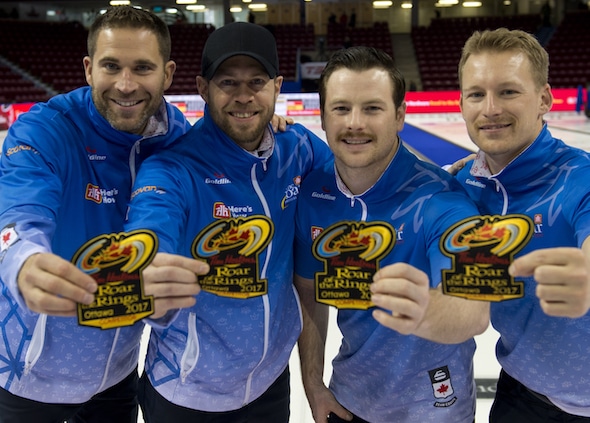 Four years ago, Morris, Jim Cotter and Tyrel Griffith went to through the Pre-Trials to qualify for the 2013 Tim Hortons Roar of the Rings in Winnipeg, and made it all the way to the final before losing to eventual Olympic gold-medallist Brad Jacobs of Sault Ste. Marie, Ont.

Sunday at Credit Union Place, that trio — with new second Catlin Schneider on board in place of Rick Sawatsky, along with coach Jody Epp — took care of the first order of business, winning the men’s A-side qualifying game of the 2017 Home Hardware Road to the Roar Pre-Trials, shading Edmonton’s Brendan Bottcher 4-3.

With the victory, Morris, Cotter, Schneider, Griffith and Epp have booked their tickets for the 2017 Tim Hortons Roar of the Rings, beginning Dec. 2 in Ottawa — the city in which John Morris grew up, and to which he still has many ties.

“It feels awesome; to get back to an Olympic trials is quite a process, it takes a few years, so to get back there feels absolutely phenomenal,” said Cotter, who abdicated last-rock duties to Morris on Friday, and the team went on to win three of its final four games with the juggled lineup. “Absolutely, (the 2013 Trials final loss to Jacobs) is a motivator. To get that close lights a fire under you, and you definitely want to put yourself back in that position. To be that close just makes you that much more hungry.”

Bottcher, vice-skip Darren Moulding, second Brad Thiessen and lead Karrick Martin will get another shot at a Trials berth Sunday at 7:30 p.m. (all times Atlantic) when they play the winner of the 2 p.m. B-side semifinal between Glenn Howard (Etobicoke, Ont.) and Greg Balsdon (Kingston, Ont.).

Morris, who won Olympic gold in 2010 playing third for Kevin Martin, said this team learned a lesson from the 2013 run to the final that it will put into play in Ottawa.

“We were sure determined in 2013, and I actually visualized playing my old team (Martin) in the final, and we actually played them in the semis,” said Morris, who will be playing in his fifth consecutive Tim Hortons Roar of the Rings. “There were just a lot of emotions in that game, and I think we let off the gas pedal a bit and we weren’t at our sharpest in the final. So, we’re going to prepare for a grind for the entire event and we won’t let up one inch until the very last rock is thrown. That will be the biggest difference.”

Julie Tippin and her team will play for a berth into the Tim Hortons Roar of the Rings on Sunday afternoon in Summerside. (Photo, Curling Canada/Michael Burns)

And while the team has been inconsistent at the beginning of the 2017-18 season, Morris has no doubt that his team is ready to put on the Maple Leaf and travel to Pyeongchang, South Korea, for the 2018 Winter Olympics.

“You bet,” he said. “We’ve been ready from the start of the season, and we’re just starting to put it all together right now. We’re a hundred per cent ready.”

With the victory, Tippin, vice-skip Chantal Duhaime, second Rachelle Vink, lead Tess Bobbie and coach Barry Westman advance to the B-side final at 2 p.m. against Winnipeg’s Briane Meilleur. The winner will qualify for the Tim Hortons Roar of the Rings, joining A-side qualifier Krista McCarville in the nine-team field in Ottawa.