Back to the beginning: Swan River’s connection to the inaugural mixed curling champion

It’s been over 50 years since the inaugural Canadian Mixed Curling Championship, and while a lot about the sport has changed, there are still strong connections to the original 1964 championship. 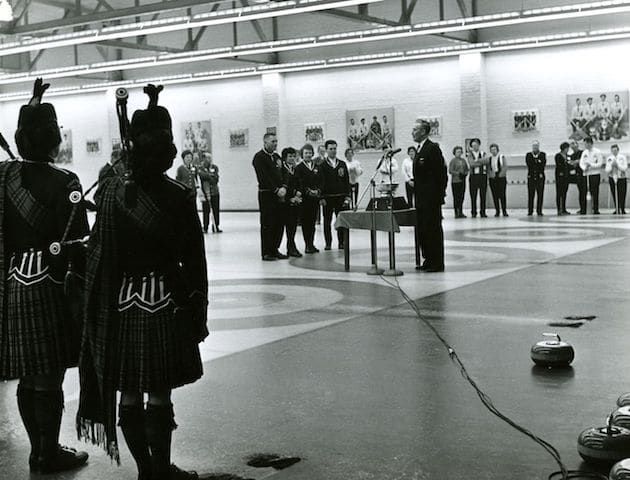 Team Manitoba, skipped by Ernie Boushy, prepares to accept the trophy as winners of the 1964 Canadian Mixed Curling Championship in Toronto. (Photo courtesy of the Boushy family)

Ernie Boushy is a two-time Canadian mixed curling champion and his name remains legendary in mixed curling. He skipped his Manitoban team from the Heather Curling Club in Winnipeg to victory at that first championship 53 years ago. This year’s championship, in Swan River, Man., is where Boushy lived in and where his son David was born. Boushy is fond when recalling what it was like to play with his line-up of third Ina Light, second Garry DeBlonde and leads Bea McKenzie (1964) and Betty Hird (1965-67). One of his earliest memories of the team was a come-from-behind victory against Ross Pearce, the runner-up in three Manitoba provincial championships. They secured the win with a draw to the house and a miss from Pearce to steal two points in the last end. “I remember that clearly,” Boushy says. “That was instrumental, that first win. After that, we just kind of got on a roll.” And it was quite the roll. The team won the inaugural Canadian Mixed Curling Championship and represented Manitoba from 1964 – 67. However, a snowstorm nearly ended that streak in 1966. The team was snowed out en route to that year’s provincial championship and they missed the first game. The team battled through snowdrifts and sleet to arrive nearly 15 minutes late for the second game. They rushed onto the ice and found their groove quickly. Boushy’s team won seven games straight to win the provincial championship, followed by a second national championship. By the time the team hung up its brooms, it had earned 104 victories in 122 games played, four provincial championships and two national championships. 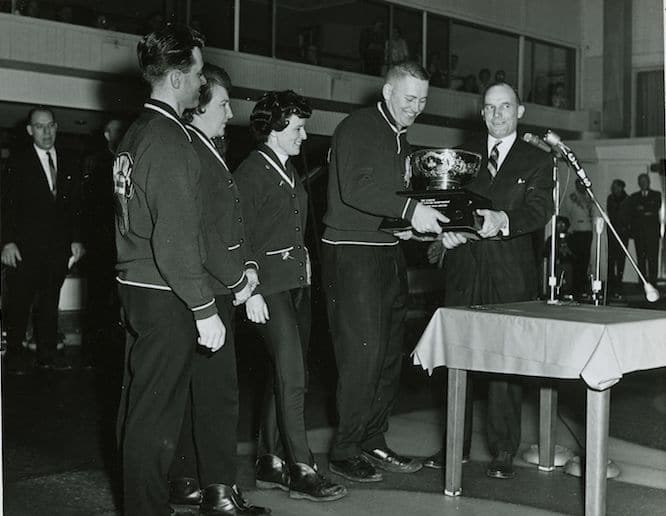 It comes as no surprise that Boushy’s mixed team is in the Manitoba Curling Hall of Fame for its exceptional four-year run, but he’s also a member of the Manitoba Baseball Hall of Fame. Boushy was scouted and signed by the St. Louis Browns (the modern-day Baltimore Orioles), before returning to Manitoba to play for the Carmen Cardinals of the ManDak League. In 1953 he moved to Welch, West Virginia, to play in the Appalachian League. The prairie boy led the league in fielding and hitting. Shortly after his baseball stint he moved to Swan River and began his rise to prominence in the mixed curling world. 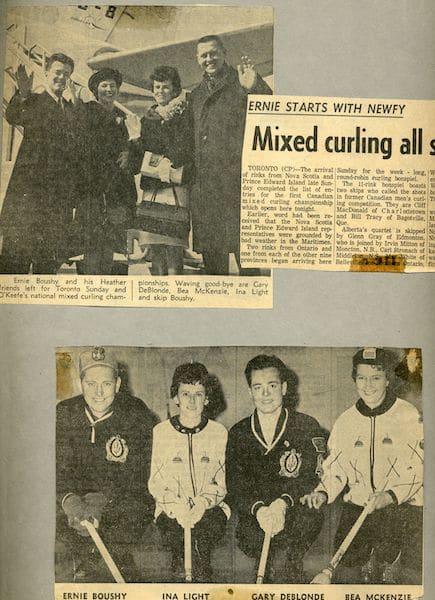 At 84, Boushy’s curling days are behind him but he remains a fan of the sport and is watching the 2018 Canadian Mixed Curling Championship closely. Not only for his personal ties to Swan River, but also because his cousin is competing. Boushy’s cousin Tom Buchy is skip of team British Columbia (they come from the same family line, but spell the last name differently). After such a run of success on the ice, it would be safe to assume Boushy has lots of memories of the ends played and rocks thrown, but that is not the case. “I actually can’t remember any of the games or if they were pivotal or anything like that,” Boushy says of the inaugural Canadian Mixed Curling Championship in 1964 at the Royal Canadian Curling Club in Toronto. What he does remember is the great time he and his team had and how wonderful the hosts were. One of his highlights was seeing Welsh actor Richard Burton perform in Hamlet. “Elizabeth Taylor [Burton’s wife at the time] was there, but she didn’t take a bow on the stage the night we watched,” he says. And it’s these memories off the ice that he recalls with his team and accredits to their success. Light was a reliable third and one of the best women on the ice in his opinion. DeBlonde was the best ‘pound-for-pound curler’ in the sport and had a friendly demeanor that was good for the team’s morale. Hird had exceptional hit weight and accuracy for a lead, which he took full advantage of with no free guard zone. “Everyone brought something to the table,” Boushy says. “I remember we faced a lot of good teams at those playdowns and I think we were successful because we got along really well, all of us.”